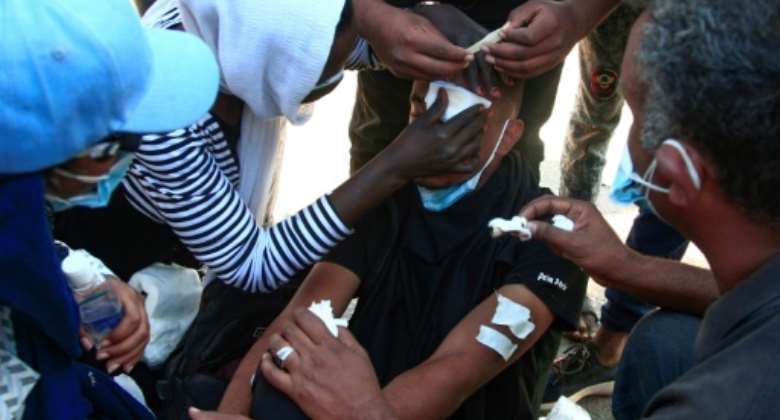 Sudanese protesters treat a young man's wounds at the scene of confrontations with security forces, in the capital Khartoum on December 25, 2021, during a demonstration demanding civilian rule. By - AFPFile

Dozens of Sudanese doctors demonstrated Sunday in Khartoum to denounce attacks by security forces against medical personnel and doctors during pro-democracy rallies opposed to the October military coup.

Carrying pictures of colleagues they say have been killed in the turmoil that has gripped Sudan over the past months, the doctors rallied dressed in their white uniforms, an AFP correspondent said.

"During every protest they (security forces) fire tear gas inside the hospital where I work," Houda Ahmad, a doctor who took part in the rally, told AFP.

"They even attack us inside the intensive care unit," she said.

According to the World Health Organization (WHO) there have been 11 confirmed attacks on health workers and health facilities in Sudan since November.

"Most of these attacks were committed against health care workers in the form of physical assault, obstruction, violent searches, and related psychological threats and intimidation," a statement on Tuesday said.

The WHO "is also aware of the interception of ambulances, medical personnel and patients during their attempts to seek safety," it added.

It called for the attacks to "stop now", saying they violate international humanitarian law and restrict patients' access to health care, particularly during the Covid pandemic.

According to the WHO, Covid-19 is a "grave threat" for Sudan, where 94 percent of the population has not been vaccinated.

One of the world's poorest countries, Sudan has confirmed 93,973 coronavirus infections and about 4,000 deaths.

By September 21 of last year, 64 percent of 1,041 health workers had tested positive, the WHO said, warning that the actual number of cases was "much higher".

The demonstrations have been met by a deadly crackdown that has seen 64 protesters killed, according to pro-democracy medics who say security forces have used live bullets, a charge the police have denied. A police general has also been killed.

Anti-coup demonstrators have called for new rallies to be held on Monday to denounce the military and demand civilian rule.

It comes as the United Nations seeks to organise talks involving political, military and social actors in Sudan to resolve the crisis.

UN special representative Volker Perthes announced the bid on Monday saying it was "time to end the violence and enter into a comprehensive consultative process".

While most anti-coup players have rejected the UN push, one group said it was willing to consider it.

The mainstream faction of the Forces for Freedom and Change, the leading civilian pro-democracy group, said Sunday it would accept the offer of a dialogue if it were to lead to the end of the coup and restoration of transition to civilian rule.