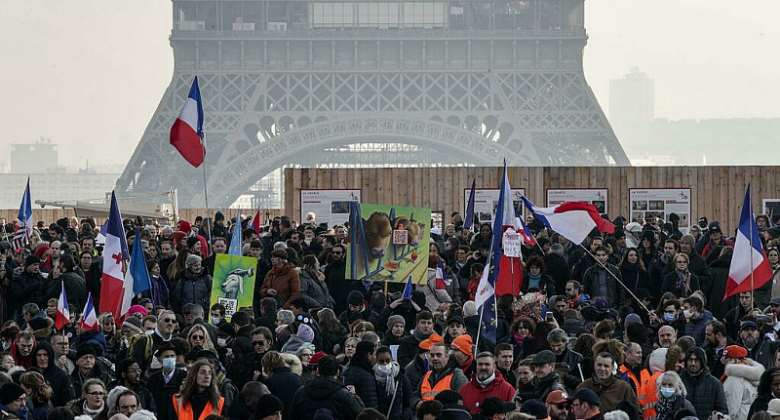 Thousands demonstrated in cities across France on Saturday against tighter restrictions on people not vaccinated against Covid-19, as parliamentary wrangling continued over the draft law.

In the capital Paris, the largest single gathering set off from near the Eiffel Tower, called by fringe anti-EU presidential candidate Florian Philippot.

People in the crowd chanted "no to the vaccine" or "freedom for Djokovic", seizing on the case of world tennis number one Novak Djokovic, who is fighting the Australian government to compete unvaccinated in next week's Grand Slam Australian Open.

"Novak is kind of our standard-bearer at the moment," demonstrator Pascal told French news agency AFP in Bordeaux.

He was marching alongside parents with children at a tennis club in the western city, where he said the coach risks losing his job for refusing vaccination.

In Paris, demonstrators bore French and regional flags, with banners bearing messages like "it's not the virus they want to control, it's you".

"It's Nazism, it's apartheid, I haven't been jabbed and I'm against vaccines in general," 60-something demonstrator Claire said.

Two others, Laurence and Claire, said they were vaccinated "but we're against the pass for teenagers, we don't see why they're being vaccinated because they aren't in danger".

While officials had not published an estimate of nationwide turnout by late afternoon, police or local authorities counted around 1,000 each in Lyon, Nantes, Bordeaux and Marseille.

Demonstrators were hoping to outstrip the 105,000 who hit the streets last weekend -- some possibly mobilised by Emmanuel Macron's declaration in Le Parisien newspaper interview that he wanted to "piss off" the unvaccinated with new restrictions until they accepted a coronavirus shot.

In the first step, a measure came into force Saturday that will deactivate the government-issued "health pass" for tens of thousands of people who have not received a booster vaccination within seven months of their first course of shots.

The pass -- which grants access to public spaces like bars and restaurants -- will be transformed into a "vaccine pass" under a law currently being debated in parliament, meaning proof of having the jab will be required.

So far people have been able to keep their pass valid with negative coronavirus tests.

"It was urgent" to get jabbed, 32-year-old Juan Fernandez said immediately after getting his shot on Saturday morning.

"When you go out, you need the health pass every time, that's the main reason I did it."

The tougher measures have been pushed hard by the government as it faces a wave of infections with the faster-spreading Omicron variant.

But the pressure on hospitals has not grown at the same pace, while Health Minister Olivier Veran has said Omicron is less dangerous and patients ill with the variant need shorter hospital stays.

MPs in the National Assembly passed the vaccine pass bill to the Senate upper house in the early hours of Saturday.

It is likely to be finally passed Sunday after back-and-forth between the two houses over questions like the minimum age for the pass and whether proprietors should be empowered to check customers' identities.

Nkoranza youth court case: Police have proven that TV sets a...
43 minutes ago