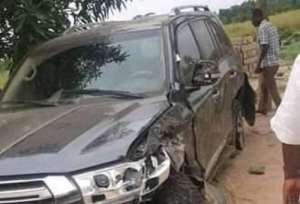 Reports have it that the accident happened at the Nkwanta road in the Oti Region on Saturday, January 15, 2022.

Manuribe's vehicle somersaulted twice when a motorcycle veered off its lane into the car's lane.

Witnesses rushed to the scene to help overturn the car.

The accident was reported to have happened on the Nkwanta to Hohoe road when he was on his way to Accra after attending an event at Nkwanta in the Oti Region.

Richard Manuribe did not sustain any major injury.

He is currently responding to treatment at the Nkwanta St. Joesph's Hospital.