MFWA demands prosecution of perpetrators over attack on Radio Ada 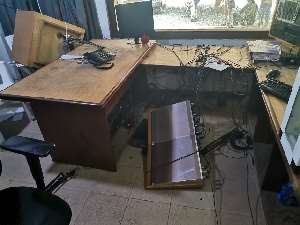 The Media Foundation for West Africa (MFWA) has called on the Police to, as a matter of urgency initiate investigations into attack of Ada-based radio station, Radio Ada, and prosecute the perpetrators.

The MFWA, in a statement published on its website on Friday, condemned the incident and called for swift prosecution of the perpetrators.

“The MFWA vigorously condemns this shameful attack on Radio Ada and its staff by the cowardly hoodlums. It is a vicious attack that seeks to silence the media house and instil fear in journalists,” the Foundation said.

It added that: “We are confident that the station and its staff will continue to stand firm in service to the public and demand that the authorities take measures to provide them the needed protection. We urge the Police to conduct thorough investigations into the incident and bring the perpetrators to book.”

Radio Ada, a community radio station in Ada in the Greater Accra Region, was on Thursday, January 13, 2022, allegedly attacked by some men, leading to the assault of two journalists and the destruction of the Station's equipment.

Management of the Station, in a statement, attributed the attack to its “Manor Munyu” and other programmes on the recent developments in the Songor lagoon.

“The attackers openly declared that they had come to vandalise the station because of its Manor Munyu and other programmes discussing the recent developments in the Songor. They threatened to inflict further havoc should the station continue with programmes on the Songor,” the management said.

Meanwhile, Management of the Station said they had reported the attack to the Big Ada Police, as well as the National Media Commission for investigation and appropriate action.

“The station will shut down for a few days from tomorrow to enable it to review and repair the extent of the damage caused,” the statement said.