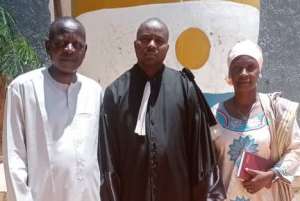 Nigerien authorities should not contest the appeals of journalists Moussa Aksar and Samira Sabou, and should reform the country’s cybercrime law to ensure it is not used to prosecute the press, the Committee to Protect Journalists said today.

On January 3, the High Court in Niamey, Niger’s capital, convicted Aksar and Sabou of violating the country’s 2019 cybercrime law, according to Ahamed Mamane, the journalists’ lawyer, who spoke to CPJ in a phone interview.

Aksar, publication director of the privately owned L’Evénement newspaper and chair of the Norbert Zongo Cell for Investigative Journalism in West Africa (CENOZO), a Burkina Faso-based news outlet and investigative journalism organization, was convicted of the same defamation charge and of “dissemination of data likely to disturb public order or undermine human dignity,” according to those sources.

The journalists appealed the convictions on January 4; Mamane told CPJ that a hearing date for the appeal had not been set.

“Authorities in Niger should not oppose journalists’ Moussa Aksar and Samira Sabou’s appeals of their convictions, and should instead focus on reforming their cybercrime law to ensure journalists are not subject to legal harassment,” said Angela Quintal, CPJ’s Africa program coordinator. “Across Africa and the world, laws focused on cybercrime have been leveraged to prosecute journalists for sharing or reporting news online. It’s an alarming trend that must be reversed.”

The charges stem from the journalists’ connections to a May 2021 report about drug trafficking in Niger, originally published by the Global Initiative Against Transnational Crime, a Switzerland-based organization that tracks organized crime.

L’Evénement republished that report on its website, and Mides-Niger published a summary of the report, which Sabou also posted on her Facebook page, according to Mamane and Sabou, who also spoke to CPJ by phone. Sabou’s professional Facebook page, where she frequently posts reporting and commentary, has about 110,000 followers.

In a response to that reporting, Niger’s Central Office for the Repression of Illicit Trafficking (OCRTIS) defended its work and said the report contained “unfounded accusations.”

Authorities arrested and questioned Sabou over that report in May, and summoned Aksar about it in July, according to a joint statement by the U.N. Special Rapporteurs for human rights defenders and freedom of opinion and expression.

In June, the Central Office for the Repression of Illicit Trafficking filed a defamation complaint against the Global Initiative; it withdrew that complaint in December, but Niger’s state prosecutor continued the prosecution of the journalists for sharing the reporting, according to multiple reports by the initiative and the withdrawal request letter, which CPJ reviewed.

When CPJ called Omar Guero Dan Mallal, a lawyer for the Central Office for the Repression of Illicit Trafficking, he asked CPJ to call back in an hour; when CPJ did so, no one answered. CPJ’s calls to the organization’s director, Boubacar Issaka Oumarou, also went unanswered.

Separately, in May 2021, Aksar was convicted of defamation under the cybercrime law and ordered to pay 200,000 West African francs (US$367) in a fine and 1,000,000 francs (US$1,835) in damages over a September 2020 L’Evénement report alleging embezzlement at the country’s Ministry of Defense, according to Mamane, as well as news reports and a tweet by the Norbert Zongo Cell for Investigative Journalism in West Africa. Mamane told CPJ that Aksar has appealed that conviction and the next court date is scheduled for March 14.

Previously, in June 2020, Sabou was jailed on cybercrime charges following a defamation complaint about a post on her Facebook page about an audit of Niger’s military, as CPJ reported at the time. Mamane told CPJ that the case had been sent for review by the Court of Cassation, and a next hearing date had not been set.