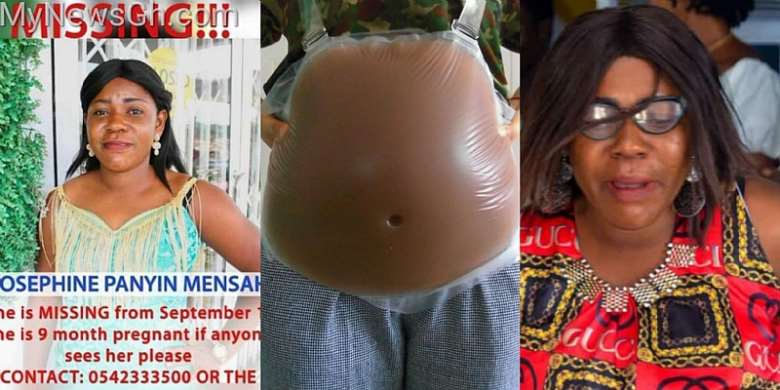 Dr. Jerry James Abrobah, the Medical Superintendent of the Axim government hospital has described Josephine Payne Simons, the lady at the centre of the Takoradi 'fake Pregnant woman and kidna' saga as , "Healthy Non-pregnant and, Pre-menopausal woman".

Josephine Panyin Simons was the supposed heavily pregnant woman in Takoradi who allegedly faked her kidnap and claimed her fresh baby was taken away.

He said, medical and physical examination undertaken on Josephine on September 21, rather proved a healthy personality who had not undergone any process of delivery or any signs of post-partum issues.

Dr. Abrobah, was responding to questions from Prosecutor Emmanuel Basantale to get evidence in Chief in support of the case of alleged kidnapping and pregnancy in a vivo voice evidence.

The Medical Superintendent told the court presided over by Justice Michael Ampadu that though physical examination showed a heavy eyes presumably after a long cry, nothing pointed to a pregnancy or delivery in the period that Josephine was examined.

He recounted: "she did not have lochia, her cervix entrance to the uterus healthy and intact, no abrasions in or outside the Vagina or vulva.

There was no darkline on the Tommy, no yellow milk from the breast, no enlarged liver, and urine, full blood count and ultrasound scan indicated medically that she was not pregnant.

"She also narrated how she was taken into a thick forest and tired and was asked to push to bring out the baby..she said it was a baby girl and heard the cry once, amid other 21 pregnant women", Dr. Abobrah added.

Mr Fifi Buckman, lead counsel asked Mr. Nyameyie how the lady looked when he was called to assist at the Jehovah Witness Church at Axim to which he responded, "She looked sick".

Mr. Abakah, the carpenter also added that though he didn't know the lady, he only went to help her.

When Mr Fifi Buckman queried on the victim's state, he answered: "she could not speak a word, I thought she was deaf and dumb or from a Nkaba-Prayer Camp.

During cross examination, the lawyer for the accused asked the doctor if he heard the brouhaha or the confusion on whether the woman was pregnant or not on radio after she was found.

Doctor Abobrah answered in the negative and explained that he was busy performing his duties at the hospital and did not have time to listen to the radio. The lead Counsel again queried, "The police medical form was given to you on September 21, 2021 and it was with you three days after the brouhaha before writing your report".

The doctor answered in the affirmative.

After that, the Presiding Judge adjourned the case to January 20, 2022 for continuation of the case.