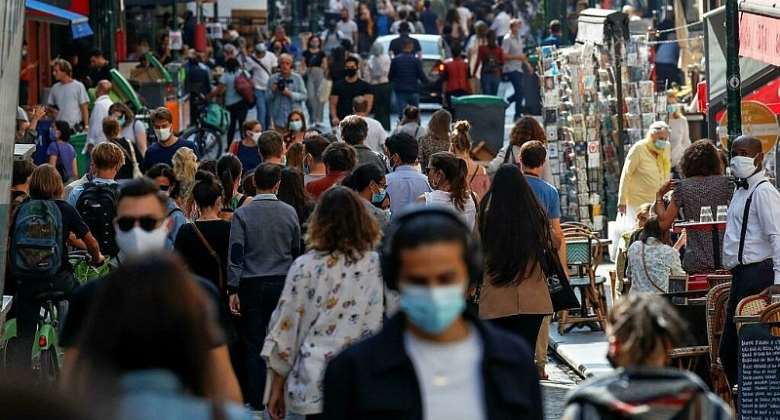 The obligatory wearing of masks outdoors in Paris has been lifted after being implemented on New Year's Eve in a bid to minimise an explosion of the Omicron variant in the French capital. Recent projections, however, suggest the latest wave of the coronavirus in France will have less of an impact on hospitals than orignally expected.

A Paris court has suspended an order from the police prefecture that imposed the wearing of masks outdoors in the French capital since 31 December.

A similar decision had already been taken in the nearby Yvelines department on Wednesday, on the grounds that the measure to combat the spread of Covid-19 was an infringement of individual freedom.

Thursday's ruling comes as the Pasteur Institute has announced that the current pandemic situation in France is "difficult but under control".

After starting 2022 in a state of uncertainty due to the explosion of cases linked to the Omicron variant, France could, like neighbouring countries, escape the worst.

According to Simon Cauchemez, a researcher in charge of the Pasteur Institute's forecast modeling: "We are moving towards scenarios that remain very complicated for hospitals but are not the hardest that could have happened."

Like many other countries, France has faced an explosion of Covid-19 cases with the average daily level of contamination reaching 300,000 cases per day - figures not seen since the beginning of the pandemic.

This can be explained in part by the exceptionally high number of tests being carried ou, but they also reflect a real resurgence of the epidemic, linked to the Omicron variant.

Omicron, which appeared at the end of 2021, is much more transmissable than its predecessors and, according to the World Health Organisation, will soon affect more than half of Europe's 400million population.

But one hope has been confirmed in recent weeks: Omicron is less dangerous than previous variants of the virus, causing fewer hospitalisations because the population is better vaccinated and also because it is inherently less virulent.

Revised projections point to a peak of between 2,500 and 5,000 daily hospitalisations by the end of January.

Fewer people are going into intensive care and are staying in hospital for less time.

However, the burden hospitals still face should not be minimised as many have already been forced to reschedule operations due to Covid pressures and exhaustion among medical staff.