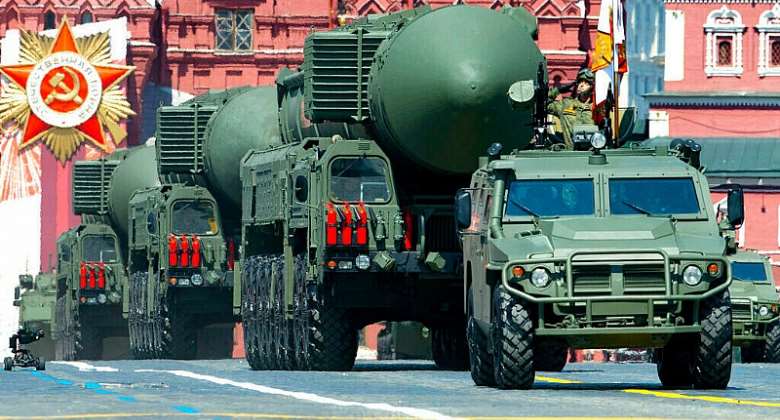 Four major geostrategy meetings took place in Europe this week with one common denomator: the relationship between Russia and the west. What was the conclusion? Things are not going well.

The series of talks, including a US-Russia bilateral meeting, a Nato-Russia summit in Brussels, a gatheringof 54 EU Defence and Foreign ministers in Western France and a meeting of the Organization of Security and Cooperation in Europe (Osce) in Vienna, all focused on one thing: the deteriorating relationship between Moscow and the West.

The EU, UK and the US are deeply concerned by a massive concentration of some 100,000 Russian troops along the border with Ukraine and wants the soliders to "go back to the barracks" according to the US State Department.

Moscow says the deployment is in reaction to what it perceives as an increasing assertiveness by the North Atlantic Treaty Organization (Nato) which it accuses of expansioninsm, with plans to incorporate former Soviet Union states Georgia and Ukraine, as well as EU member Finland.

The week kicked off on Monday with a 7-hour meeting between US Assistant Secretary of State Wendy Sherman and her Russian counterpart, Russian Deputy Foreign Minister Sergei Ryabkov.

Ryabkov was reported as saying to Sherman that Russia "had no plans to invade Ukraine," and that the two sides agreed to more efforts to curb tensions from turning into a full-blown confrontation. But no real breakthrough was achieved.

On Wednesday, another Russian Deputy Foreign Minister, Alexander Grushko, met with Nato head Jens Stoltenberg in Brussels, with Sherman representing the US delegation.

There was some progress at that gathering, as both sides revived the Nato-Russia council - a platform that has not met since 2019.

"It is a timely opportunity for dialogue at a critical moment for European security. When tensions are high, it is even more important that we sit down around the same table and address our concerns," according to Nato Secretary General Jens Stoltenberg.

But things did not improve as Western delegations to Nato underlined that Moscow would have no veto on Ukraine - or on any other country - wishing to join the military alliance and warned Russia would pay a high price if it invaded Ukrainian territory.

At the end of their meeting, Nato's 30 member states told the Russian envoys to return to Moscow and advise President Vladimir Putin to join them for a series of confidence-building talks on limiting provocative military exercises, arms control and reciprocal limits on deploying missiles.

But essentially, no breakthrough was reached, with both sides citing "deep" and "fundamental" differences when the meeting was over, without going into details.

For the third round of talks, the world's largest security body, the OSCE, met in Vienna on Thursday and little progress was reached there, either.

On the eve of that meeting, Russian spokesperson Dmitri Peskov said that Russia had no "shortage of political will" to continue meetings but reiterated that Moscow needed to see concrete results.

He added that Russia expects "concrete" written answers to its security demands in the coming days.

However hopes on progress where dashed when Ryabkov stated in an interview with the Rusian language channel RTVI that Moscow "sees no reason to hold a new round of security talks with the West in the coming days following a lack of progress during ongoing negotiations."

Brest: the EU wants to have a say too

Meanwhile, 54 EU Defence and Foreign ministers began a three-day meeing in the French port city of Brest on Wednesday. By Thursday, they declared that they "would not negotiate with Russia over Ukraine's future."

While stopping short of threatening President Vladimir Putin with a possible military response, defence and foreign ministers from the bloc said an invasion would prompt "severe sanctions" and ruin Moscow's relationship with the EU for decades.

"Russian movements are part of the pressure," EU foreign policy chief Josep Borrell told reporters on the sidelines of the meeting. There "should not be negotiation under pressure," he said.

"We have received assurances that nothing will be decided nor negotiated without the Europeans, and coordination with the Americans is absolutely excellent," Borrell said, adding that the EU is "in constant contact with the US - more than 100 contacts this week".

While there no formal joint resolution on the crisis is expected when the ministers' meeting wraps up this Friday, a political statement is likely.

Longest war in Europe since WW2

Russia has put intense pressure on Ukraine since 2014, after a revolution overthrew a government that had sided with the Kremlin against moving closer to Europe.

Russia seized and annexed the Crimean Peninsula eight years ago and Moscow backs an insurgency in eastern Ukraine in which more than 13,000 people have died, making it the longest armed conflict on European territory since the Second World War.