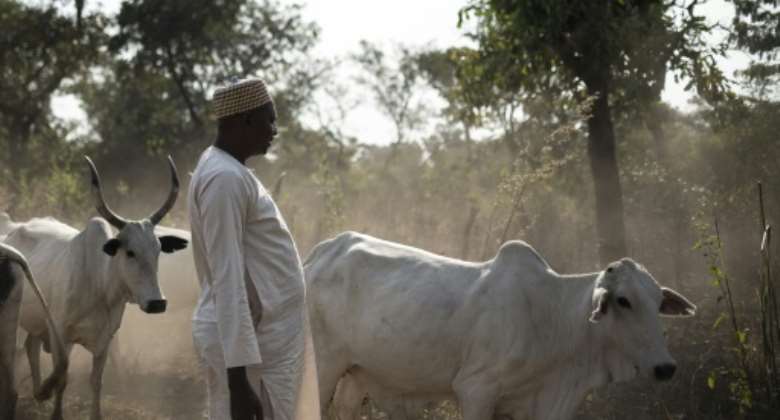 Both armed militias and pro-government forces are known to frequently target nomads. By Barbara DEBOUT (AFP)

Lamine Bina casts a long shadow over his herd on a plain in the Central African Republic's rural northwest.

In the middle of the annual trek to summer pastures, the herder looks nervously between his herd and the horizon.

Both armed militias and pro-government forces are known to frequently target nomads like Bina, 37, a Fulani whose name has been changed for his safety.

For two decades he has made the same trek between October and June, leaving the arid plateaus of Chad and Sudan to reach the plains of the Central African Republic and its sizable livestock markets.

But the resurgence of violence in the vast, troubled country has made nomadic life even harder.

After three years of declining violence, the civil war has flared up again, with rebels launching an offensive a year ago to overthrow the head of state, Faustin Archange Touadera.

The resurgence of violence in the vast, troubled country has made nomadic life even harder. By Barbara DEBOUT (AFP)

They were quickly repelled by a lightning army counter-offensive supported by hundreds of Russian mercenaries from the private security company Wagner, according to the UN.

The civil war began in 2013 between CAR's dysfunctional state and several armed groups, some of which still control as much as two-thirds of CAR's vast expanse.

After being routed in the cities, the rebels changed tactics and are now carrying out guerrilla actions in the countryside including kidnapping herders for ransom, especially during the trek to summer pastures.

The ransoms are a windfall for the militias as livestock farming accounts for around 13 percent of the CAR's gross domestic product, according to the UN.

"I've lost a lot of oxen," says Bina in his long beige boubou robe, stroking the snout of one of his herd.

"The rebels regularly ask me for money, but I can't pay. They take 10 or 15 oxen and the situation can quickly deteriorate if I refuse," he says.

The extortion takes a toll on Bina, who owns about 70 head of cattle.

Out of fear of being targeted again, he stays in the town of Paoua, a town 500 kilometres (300 miles) northwest of the capital Bangui.

"The situation forces me to sell locally, at a lower price," he said, his voice dampened by the sound of hooves and mooing.

The civil war began in 2013 pitting CAR's fragile government against a multitude of armed groups. By Barbara DEBOUT (AFP)

Mahamat, a fellow herdsman, said: "We also need to graze our animals in the bush, and travel -- but the rebels are there".

Rebels around Paoua belong to the Return, Reclamation and Rehabilitation (3R) faction, one of the region's most powerful armed groups, presenting itself as a Fulani self-defence militia.

Before the joint army-Russian offensive, the group had a grip on the whole of the northwest, pocketing substantial income from the annual migrations.

Out of fear they would be taxed, looted or killed, many herders joined the group or relied on 3R to back them in their long-running clashes with sedentary farmers.

After being routed in the cities, the rebels changed tactics and are now carrying out guerrilla actions in the countryside. By Barbara DEBOUT (AFP)

Violence between the two pre-eminent forms of farming has been entrenched in the region for centuries.

Some nomads migrate with their animals from the Sahel to graze in less arid areas, in this case from Chad and Sudan to the Central African Republic, frequently triggering land disputes and deadly clashes.

Now, the nomads also claim to be victims of pro-government forces, in particular Russian paramilitaries, recently accused by the UN of crimes against civilians in the CAR.

Out of fear they would be taxed, looted or killed, many herders joined the group or relied on 3R to back them in their long-running clashes with sedentary farmers. By Barbara DEBOUT (AFP)

"The military accuse us of being in cahoots with the rebels," said a farmer in the Paoua area who requested anonymity for fear of reprisals.

"It is not uncommon for them to shoot at us and our animals," he says.

Thierry Vircoulon, a specialist in the region at the French Institute of International Relations (IFRI), said Fulani herders are "targeted by the pro-government forces" who mistake them for members of the 3R militia.

"The Russians make a very simple ethnic identification" and do not try to differentiate between herders and militiamen, adds Roland Marchal, a researcher at the Centre de recherches internationales (CERI) at Sciences Po in Paris.

The herders, pushed out of established migratory corridors, take other routes -- sometimes, along with their herds, encroaching on farmers' fields.

In June 2021, at least 14 people were killed in fighting between the two communities in the northwest, near the border with Chad.