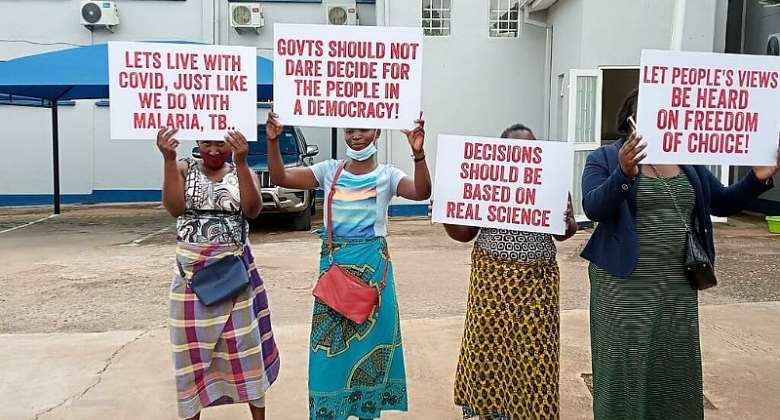 A high court in the Malawi's capital Lilongwe dismissed on Thursday an application by a civil society group that aimed to stop government from implementing mandatory Covid-19 vaccines.

“As of now we still have to analyze the whole document then sit down to discuss the way forward,” said lawyer Oscar Taulo after the ruling, adding that they can reapply the case to the Supreme Court.

He represents Centre for Democracy and Economic Development Initiatives (CDEDI), and freelance journalist Mundango Nyirenda, who brought the case to court.

Attorney General Thabo Chakaka Nyirenda said the case was thrown out because health minister Khumbize Kandodo Chiponda's announcement was an intention, not a requirement.

“You can't sue based on intention,” said  Nyirenda.

“We don't have policy on mandatory vaccination because for that to be effective there has to be a process,” he added.

That apparently wasn't the case in December, when both CDEDI and Nyirenda filed their application after Chiponda announced plans by government to make Covid-19 vaccines mandatory for frontline staff.

"Accumulating data is continuing to indicate that the majority of those being admitted to our emergency treatment units or losing their lives to COVID-19 have not been vaccinated,” said Chiponda, justifying the decision.

Human rights groups, media organisations and legal experts questioned the legality of the decision. They called for the government not to 'coerce' but instead 'convince' the people to get the vaccines.

Executive director for CDEDI Sylvester Namiwa and Nyirenda applied not only to stop the ministry from implementing the mandatory administration of the Covid-19 vaccine, but to prevent private and public institutions from demanding Covid-19 certificates from employees and customers in order to access their premises.

On Thursday afternoon, dozens of anti-compulsory vaccination supporters stood outside court while the judgement was read.

They were brandishing signs reading "decisions should be based on real science", "let's live with Covid, just like we do with Malaria and TB", and 'let people's views be heard on freedom of choice', among others.

“To be vaccinated is a choice. One has to choose whether to take it or not. What I have observed is that government wants to kill the rights of the people,” said Boniface Chikanda, one of the protesters.

He was holding a sign which read "why all this censorship? Same Covid or it's something else."

Some residents were disappointed at the decision.
“If they want to start with the civil servants, then obviously that law might be extended to ordinary people like us. We're not ready for that,” said Blantyre resident Chisomo Kapata.

If some Malawians refuse to get vaccinated based on belief, then their right premises on freedom of conscience and belief protected in Section 33 and 45 of the Constitution, said Patrick Mpaka, Malawi Law Society president.

“Compulsory vaccination interferes with the human right of bodily integrity, which is part of the right to private life enshrined in the Universal Declaration of Human Rights and in Section 21 of Malawi Constitution,” said Mpaka.

Vaccination has been a contentious issue in the southeastern African nation where myths and misinformation are rife.

Data on how many health workers and other civil servants were vaccinated is hard to come by. But according to WHO, right now fewer than 1.5 million people of the 17 million total population have received vaccine doses.

Last week, community members in the southern district of Mulanje rushed to school with weapons after hearing a false rumour that their children are receiving the vaccines.

There has been other attacks targeting health workers across the country.