Southern Africa's Namaqualand daisies are flowering earlier: why it's a red flag

By Jennifer Fitchett - The Conversation
Article 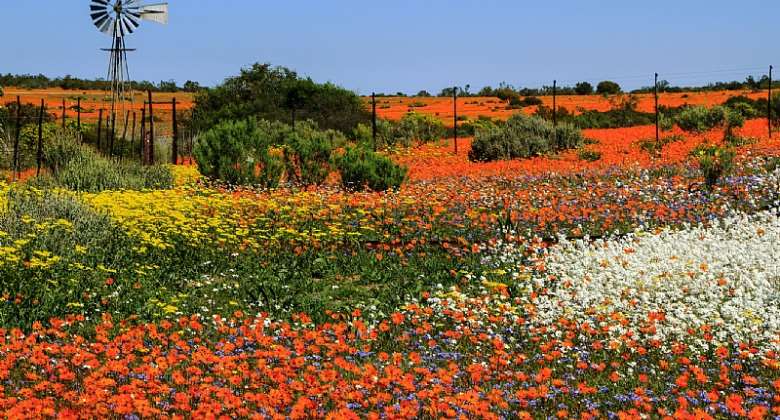 Climatic drivers over the past 80 years have resulted in flowering season starting in late winter instead of spring. - Source:

In late August each year, the normally barren landscape of the Namaqualand, along the western boundary of South Africa, is transformed into a vista of brightly coloured daisies as far as the eye can see. The flowering of the Namaqualand daisies attracts close to 10,000 tourists per season to a part of the country that doesn't get many visitors otherwise. But climate change poses a threat to the flowering event, and to the tourist arrivals which generate regional income.

The Namaqualand daisies (Dimorphotheca sinuata) are endemic to the Northern Cape and Western Cape provinces of South Africa, and have evolved to survive the harsh, dry climatic conditions. During the early spring, flowering of the daisies is triggered by the change in temperature and rainfall. This is an example of what is termed a phenological event.

Phenological events – such as the timing of spring blossoming, fruit development in summer and the hibernation, hatching, and mating of animals – are among the most sensitive bioindicators of climate change. Across the world, the timing of phenological events is shifting as a result of climate change. Plants and animals experience “spring” as happening in what used to be “late winter”. Simply put, temperatures in the late winter months are increasingly higher than they used to be.

The rate of change in the timing of phenological events is, however, highly species and location specific. For this reason, it's important to study as many different plants and animals, in as many places, as possible. When we know the rate of change for a particular species and location, we can tailor our adaptation. This is particularly important for the Namaqualand daisies so that we know when to book tourist visits.

Phenological research is sparse in Africa , compared to Europe, North America and East Asia. This is largely due to a lack of deliberately collected phenological data to analyse.

Recent studies of shifts in the timing of flowering of jacarandas in Gauteng, and of the migration of the sardines along the east coast of South Africa, have revealed the importance of traditional news media and social media records as sources of data. We used the same approach to study changes in the timing of the Namaqualand daisies. This is important for planning tourism and for understanding more about nature's responses to climate change.

We compiled a total of 663 records of flowering dates of the Namaqualand daisies from a selection of daily newspapers spanning 1935-2018, and from posts on Flickr and iNaturalist. Each record was coded in terms of the date of reporting, date of observation, and the extent of bloom reported – first flowering, peak bloom, and end of the flowering season. These dates were then analysed for changes through time. We found an advance in the timing of first flowering, peak bloom and the end of the flowering season.

These trends were then compared to climate data from seven meteorological stations in the Namaqualand region to understand the climatic triggers of flowering, and the drivers of this advance. The strongest climatic drivers were found to be temperatures during winter and early spring, the amount of winter rainfall, and the timing of onset of the rainfall season. These factors acted together to trigger flowering, and the changes of each of these climatic variables over the past 80 years have resulted in the advance in flowering dates.

So what does this mean for tourism in the region?

As flowering dates are happening earlier, the timing of organised and independent flower tours will need to shift to give tourists the best chance of experiencing the region in peak bloom.

Unfortunately, this isn't as easy as arriving 2.1 to 2.6 days earlier each decade; under climate change the timing of flowering is also becoming more unpredictable. Even when adapting bookings to earlier flowering, tourists might arrive before or after flowering has happened. This favours last-minute travel decisions and bookings, which are more difficult for the tourism sector to plan for.

A phenological shift is an evolutionary response to a changing climate, but cannot take place indefinitely. The advance in flowering places the daisies at greater risk of frost events (which do still occur in a warmer climate), and the reduction in the dormant period weakens the plants. This places them at greater risk of failed flowering seasons, and eventually local extinction. This would be a blow to biodiversity and a major loss to the tourism sector of the region.

In the meantime, the flowering dates will continue to advance as long as the climate keeps changing. As these are wildflowers, agricultural solutions like changing crops, changing the location of a farm, or using hybrids aren't appropriate. People need to make the most of the flowers while they can, and visit them while they do still have spectacular annual blooms. To help the tourism sector, visitors could try to book in advance, and return to the region outside the peak season.

Jennifer Fitchett receives funding from GENUS, the DSI-NRF Centre of Excellence for Palaeosciences. She is the African councillor of the International Society of Biometeorology.

By Jennifer Fitchett, Associate Professor of Physical Geography, University of the Witwatersrand