The Untold Story Of The Mormons 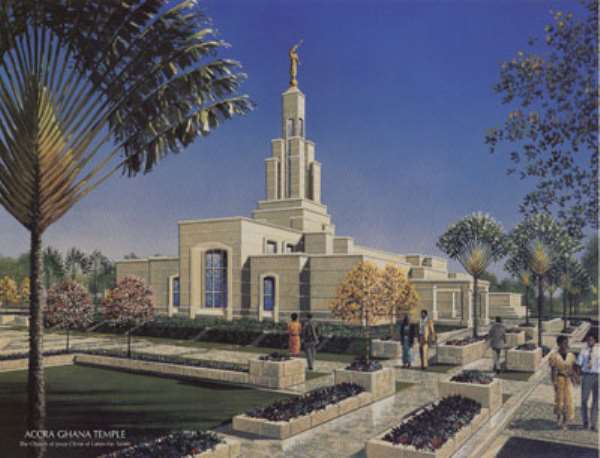 … God cursed black men and gave them flat nose IN the wake of civil legislation across the world and anti-racism campaigns against the Church of Jesus Christ of Latter Day Saints in America came an incredible revelation on June 9, 1978, from the Mormon President, Spencer W. Kimball, who announced that he had received a revelation which signalled the end of the Church’s ban on blacks’ acceptance into the priesthood, The Chronicle has gathered. Until then, the Church had pontificated that blacks would never hold priesthood in the church because they bore the “Mark of Cain” and had been born through this lineage as a punishment for their failures in the pre-existence. According to Mormon scriptures, when Cain rebelled and rose to slay his brother Abel, God cast him away from His face and cursed him to be a vagabond and a fugitive. He identified him with black skin. A Mormon book called “Pearl of Great Price”- Moses 6:40, states that, ‘I the Lord set a mark upon Cain, lest any finding him should kill him.” The incredible revelation, which is speculated to have been induced by international protestations against the Mormons, stated that “the long promised day has come when every faithful, worthy man in the Church may receive the holy priesthood.” President Kimball said that, he had received the revelation “after extended meditation and prayer in the Salt Lake Temple”. Mormon scriptures indicate that the same revelation came to his counselors and to the Quorum of the Twelve Apostles in the Temple. The Kimball revelation was said to have sent shock vibrations through the membership of the church who felt that an eternal proclamation by the founding fathers of the church that God had perpetually cursed black people and could not become priests in the Church, should be upheld. Early Prophets of the Mormon Church taught that this mark of Cain was a black skin. They were also said to have believed that the real curse on all who bore the mark of Cain was that, they would be forbidden to attain Mormon priesthood. A Mormon scripture attributed to Abraham, quotes him as saying that: “we were told that, this curse of a black skin was carried across the flood through the black-skinned Egyptian Wife of Ham, the son of Noah.” In Pearl of Great Price, Abraham is again quoted as saying that, “Now Pharaoh, being of that lineage ” could not be admitted into the priesthood, therefore all blacks who Mormons believed at the time were from that lineage were banned from priesthood. Early Mormon leaders had many racist and bigoted things to say about blacks under the guise of their touted special revelatory spiritual knowledge. MORMONS & THE BLACK RACE Joseph Smith, the founder of the Church of Jesus Christ of the Latter Day Saints, at one time said that something needed to be done with blacks. The Founder of the Church said: “ Had I anything to do with the Negro, I would confine them by strict law to their own species and put them on a national equalization.” Joseph Smith’s successor, Brigham Young - the second prophet of the church whom Mormons believe, led them to the Salt Lake Valley after they had been chased out of New York and also out of Mavou- along the swamp of the Mississippi river due to their religion. Brigham Young, in whose memory the Brigham Young University, which now hosts Jake Obetsebi- Lamptey’s daughter, was named, was the most vocal in the campaign against blacks. “You see some classes of the human family that are black are uncouth, uncomely, disagreeable and low in their habits, and seemingly without the blessing of the intelligence that is generally bestowed upon mankind.. Cain slew his brother.. And the Lord put a mark on him, which is a flat nose and a black skin. “Shall I tell you the law of the God in regard to the African race? If the white who belongs to the chosen seed mixes his blood with the seed of Cain, the penalty, under the law of God is death on the spot. This will always be so.” John Taylor, the third prophet of the Latter Day Saints also explained how the blacks survived the flood - “After the flood, we are told that the curse that had been pronounced upon Cain was continued through Ham’s wife, as he married a wife of that seed. And why did it pass through the flood? Because it was necessary that the devil should have a representation upon the earth as well as God.” Joseph Fielding Smith, the tenth prophet of the Church of the Mormon Church wrote: “Not only was Cain called upon to suffer, but because of his wickedness, he became the father of an inferior race. A curse was placed upon him and that curse has been continued through his lineage and must do so while time endures.” Fielding further said: “Millions of souls have come into this world cursed with a black skin and have been denied the privilege of priesthood and the fullness of the blessings of the gospel. These are the descendants of Cain.” “Moreover” Fielding continued, “they shall have been made to feel their inferiority and have been separated from the rest of mankind from the beginning. ..We will also hope that blessings may eventually be given our Negro Brethren, for they are our Brethren-children of God-Not withstanding their black covering emblematical of eternal darkness.” Until 1978, the Mormons had been taught by the founders of the Church that Negroes were doomed to the curse until after the return of Christ for his millennial, thousand year reign- for this, blacks could not enter the Mormon Temple or join the priesthood. With the passage of time, however, civil rights legislation brought the Mormons Church once again into conflict with American standards.