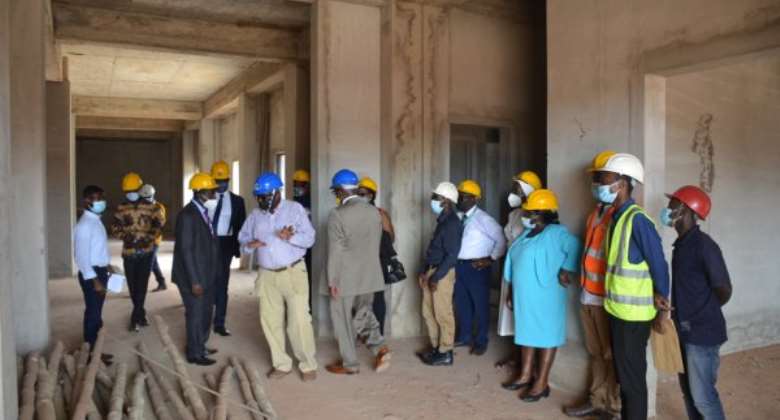 The board and management of the Komfo Anokye Teaching Hospital (KATH) in Kumasi have expressed worry over the continued delay in the completion of works on a sickle cell and blood centre project for the hospital.

Construction works on the project, which is being sponsored by the Sickle Cell Foundation of Ghana (SCFG) with funding from the Ghana National Petroleum Corporation (GNPC), have come to a halt for more than two years.

So far, the first fixing of the plumbing and electrical works have been completed and the building of the basement structure and ground floor has also been finished.

However, further works on the project have been aborted because the contractor had not been paid since August 2020 and at the end of the year 2021, the project was still behind schedule.

This came to light when the Chief Executive Officer of KATH, Dr Oheneba Owusu-Danso, led members of the KATH Board to visit some of the hospital projects under construction.

The visit was to allow the board members to acquaint themselves with the progress of work on the projects and the challenges facing the contractors.

Nana Asibey Opoku, Consultant to the project, told the team that since August 2020, no payment had been made to the contractors, thus accounting for the stalling of the project.

He said the Foundation had lobbied the Asantehene, Otumfuo Osei Tutu II, to press on the GNPC to release funds for the completion of the project.

The GNPC, through the Asantehene in 2016, presented a cheque for $4.5 million to the Sickle Cell Foundation for the construction, tooling and training of the personnel for the first-ever Sickle Cell and Blood Centre in Ghana at KATH.

The board appealed to the GNPC to honour its pledge and pay the contractor to enable them to complete the project.

When completed, the centre will serve as a one-stop for the management of all sickle cell cases and blood transfusion-related services for the northern half of the country.