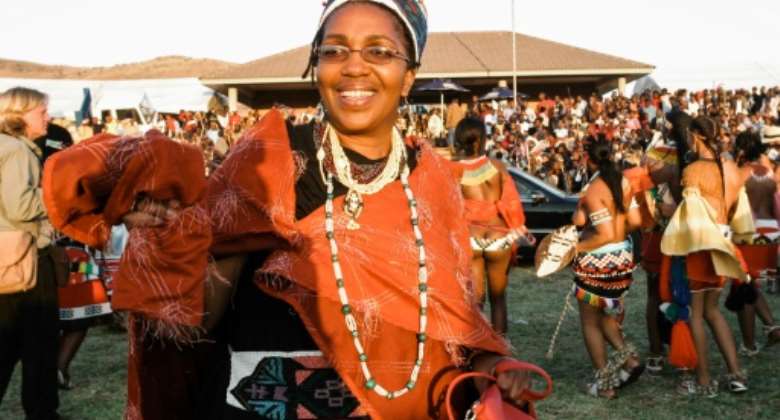 One of the six widows of South Africa's Zulu king launched a legal succession bid Tuesday arguing that she is the monarch's only legitimate widow as they had a civil marriage, while he wed his five other wives only according to traditional rites.

King Goodwill Zwelithini died in March last year at age 72 after 50 years on the throne, leaving behind his six wives and at least 28 children.

In his will he had named his favourite, third wife Shiyiwe Mantfombi Dlamini, as regent of the more than 11 million Zulus who make up nearly a fifth of South Africa's population.

But Shiyiwe died suddenly in April -- just a month after the king -- leaving a will designating their son Misuzulu Zulu, 47, to ascend to the throne.

The coronation has yet to take place, and Misuzulu did not attend Tuesday's hearing.

However several other Zulu royals were present, some wearing animal skins around their shoulders or a fur crown on their heads.

A lawyer for Queen Sibongile Dlamini, the king's first wife who is contesting Misuzulu's right to the throne, asked the court: "Does a civil marriage preclude customary marriage?"

The "validity of the customary marriages is one of the main issues, your worship," Nigel Redman added.

The judge, Isaac Madondo, acknowledged that the case presented "not only a legal issue (but also concerned) the conflict of law between common law and custom law".

The first queen is also seeking half of the royal inheritance before the court in Pietermaritzburg, capital of South Africa's eastern KwaZulu-Natal province.

The Zulu king, who had no executive power but wielded great moral influence over his subjects, owned thousands of hectares of land as well as several palaces and other properties.

Some Zulus say royal matters have no business going before a court, and dozens of Zulu warriors wearing animal skins and carrying shields and spears protested outside the courthouse on Tuesday, singing traditional songs.

Queen Sibongile's two daughters, princesses Ntombizosuthu and Ntandoyenkosi, are for their part contesting the validity of the will.

They say a handwriting analysis determined that the signature was forged.

The hearing was to resume on Wednesday.