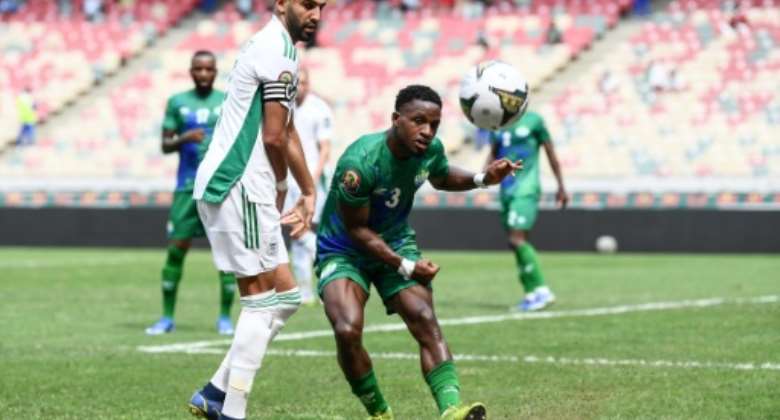 Riyad Mahrez and Algeria stuttered to a 0-0 draw against Sierra Leone in the opening game of their Africa Cup of Nations title defence on Tuesday. By CHARLY TRIBALLEAU (AFP)

Algeria began their defence of the Africa Cup of Nations title with an underwhelming 0-0 draw against Sierra Leone in Douala on Tuesday, as Riyad Mahrez's side struggled to break down one of the tournament's rank outsiders.

Qatar-based winger Yacine Brahimi missed the holders' best chance early in the second half, when he found himself with just the goalkeeper to beat, only for Mohamed Kamara to hold his shot at the second attempt.

The draw allows Algeria to extend their remarkable unbeaten run in competitive action to 35 games, but it also means their chief Group E rivals Ivory Coast can seize the initiative by beating Equatorial Guinea at the same venue on Wednesday.

The heat and humidity of a mid-afternoon kick-off at the Japoma Stadium in Cameroon's economic capital undoubtedly didn't help, but Sierra Leone deserve enormous credit for their display in their first appearance at the Cup of Nations finals in 25 years.

Ranked 108th in the world, they were bolstered by the presence of former England international Steven Caulker in central defence, while China-based Mohamed Buya Turay was lively on the left wing.

They can be hopeful of building on this result to advance to the last 16, with the best third-placed sides progressing from the group stage in what is now a 24-team competition.

John Keister's team were backed by a vociferous support inside the stadium, although the overall attendance in the 50,000-seat ground may barely have reached four figures.

Alhaji Kamara, who plays for Danish side Randers, came close with an early snapshot for Sierra Leone, while Turay also tested Rais M'Bolhi in the first half.

Kamara then had an effort disallowed for offside after the break before Brahimi's gilt-edged miss at the other end.

With Mahrez lacking inspiration, it was left to West Ham United's Said Benrahma to drag a shot wide late on, shortly after coming off the bench, while Ramy Bensebaini was also denied by Kamara at the death.

Algeria, who defeated Senegal in the 2019 final, face Equatorial Guinea in their next game on Sunday.