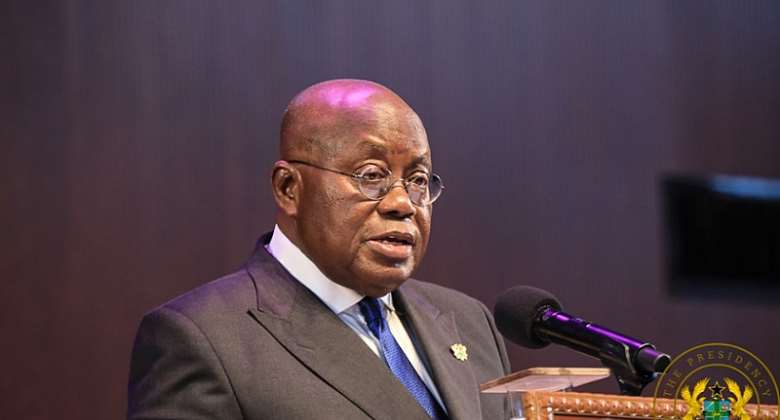 I will be very brief with my letter this afternoon, and I respectfully crave your indulgence for same. Let me start off by congratulating you on your re-election and swearing-in as the 5th President of the 4th Republic.

Undoubtedly, your good work in your first term won you this victory (with over five-hundred thousand vote difference against the NDC flagbearer, Mr. Mahama). That is indeed an evidence of the fact that Ghanaians appreciate your competence and hardwork.

As for the humiliation that greeted the party's parliamentary performance in the just ended election such that the NPP dropped from 169 to 137 seats, and had to virtually beg the once ostracized independent candidate and now MP for Fomena, Hon. Andrew A. Asiamah to rejoin the NPP's MPs in order to form a majority in the august House of Parliament, the least said the better.

I, just like the millions of Ghanaians who watched you on TV when you mounted the podium to deliver your inaugural address before Parliament last Thursday, saw nothing other than grim on your face. Even your popular introductory phrase, "fellow Ghanaians" was conspicuously missing in your entire speech for the first time, and that was unbelievable (I stand to be corrected).

As to how some of your own MPs could vote against the party's candidate for Speaker of Parliament, Rt. Hon. Prof. Aaron Mike Ocquaye amazes even the devil. Our forebears couldn't have been wrong when they coined the adage, "Suro nipa na gyae saman ampa." (To wit, be cautious of the living than a mere ghost). Nana, your own people betrayed you when you needed them most. The two MPs who caused the party's misfortune by their conduct are invariably telling you that they have no heart of loyalty as you. Their personal interest supersedes the collective interest of the NPP and this should be a wake up call to you, respectfully.

Mr. President, there is no denying the fact that you are a good man who cherishes loyalty and hard work, however, I'm sorry to say, your "over-leniency" (for want of better words) is what has given room to this betrayal. Respectfully, you gave too much freedom and comfort to some of your Ministers, Deputy Ministers, MPs, CEOs, MMDCEs and CEOs in your first term. Even in the face of overwhelming evidence of misconduct on the part of some, you allowed them to stay on.

You rarely reshuffled your appointees in your first term. On the very few occasions you did, respectfully, it was more or less like musical chairs. The same "adikroment". Nothing extraordinary. Anytime I remember the days of former president Kufuor, I get disappointed and ask myself why you gave these crop of appointees so much freedom. Far from doing comparison, suffice to say Kufuor, apart from his Defence Minister (a very sensitive portfolio) who stayed on for long, he virtually reshuffled his ministers every almost every year. In your case, that didn't not happen.

The point is that some of these very self-seeking appointees arrogated so much power unto themselves and behaved like tin gods in the government and party; displaying blatant opulence; sorting out their multiple girlfriends and cronies at the detriment of party footsoldiers who campaigned in the trenches leading to the party's victory.

Mr. President, I'm reluctantly restrained from citing specific examples, suffice to say, thankfully, you have a second chance to prove that you are the same fearless, tough-speaking, and no-nonsense Akufo-Addo Ghanaians knew in the 90s and early 2000s.

Mr. President, please sack the non-performing, disrespectful and arrogant appointees. They need no pampering or second chance. There are thousands, if not hundreds of competent and loyal men and women in the party who can also deliver. Please give them the chance too. Those who have distinguished themselves in the last four years also need elevation.

Mr. President, you are loved by many. Some of us will stand by you through thick and thin, but we cannot promise the same for some of your appointees in your second term. Should they get themselves entangled in needless scandals and controversies, please note that footsoldiers will have no option than to OPENLY criticize them. We will do so, not because we hate them but because we want the NPP to break the 8-years jinx which we have all been championing. We cannot afford to lose power to the incompetent NDC in 2024. This is my humble plea.

Thank you, Your Excellency.