Beninese pray to Voodoo's sea goddess of fertility and beauty 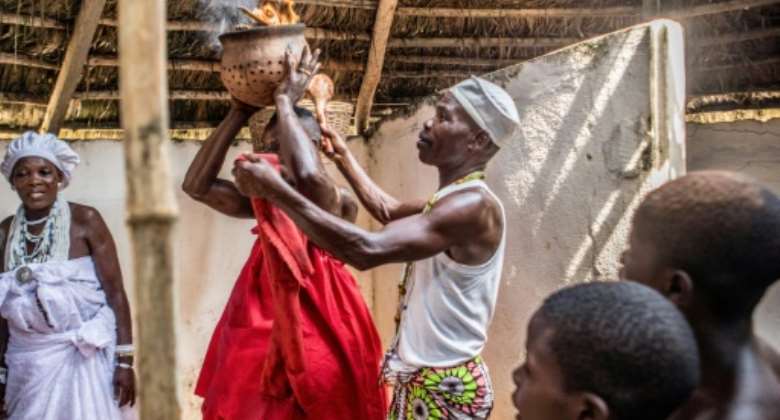 Every January, Benin's Voodoo followers gather on the beach at Ouidah, a former slave trading hub. By Yanick Folly AFP

The waves rumble and crash onto a beach in southern Benin as dozens of followers of Mami Wata, goddess of the sea, chant to welcome the national holiday of Voodoo.

Every January 10, Beninese pay tribute to the deities of Voodoo, a religion that worships gods and natural spirits along with respect to revered ancestors.

Voodoo, known locally as Vodoun, originated in the Dahomey kingdom, present-day Benin and Togo, former French colonies on the coast of West Africa.

In Ouidah, a small beach town on the Atlantic Ocean and a former slave trading hub, worshippers pay homage each year to Mami Wata, the most famous Voodoo deity.

Dressed in white cloths and adorned with pearls, around 40 worshippers formed a semi-circle on Monday facing the ocean.

"Every January, I only come to Ouidah because this is the beach where we find the soul of this celebration, the soul of Vodoun," said Gnikplin Hounon Eveole, 70, who travelled from neighbouring Togo for the occasion.

"Mami Wata is not just some fetish, she is the queen of the water. She lives in the sea."

Millions of slaves once passed through Ouidah on their way to the New World, taking Voodoo practices with them.

Many Beninese practise Voodoo beliefs alongside those of Christianity or Islam. By Yanick Folly AFP

Today the religion has 50 million followers worldwide, from Brazil to Haiti to the southern US state of Louisiana.

Many Beninese practise Voodoo beliefs alongside those of Christianity or Islam.

Voodoo deities celebrated in Benin also include Heviosso, the god of thunder, the Earth god Sakpata, and Kokou, the god of war.

Mami Wata, though, is especially revered, credited with the power to provide health, fertility and beauty. Most of those on the Ouidah beach are women.

"I owe all my wealth to this deity," Eveole said. "The main thing is to respect her ways."

"The queen of the waters saved them, and it was after they were healed that the deity made me a follower."

Outsiders are told little about the Voodoo deities or their worship and followers are prohibited from revealing the cult's teachings.

Outsiders are told little about the Voodoo deities or their worship. By Yanick Folly AFP

On the Ouidah beach, followers made offerings to Mami Wata, but the uninitiated were kept at a distance from the ceremonies.

The secrecy and mystery are not always welcome.

"Everywhere I go, I am blessed, but I must say that people are sometimes afraid of me," said Renaudia Houngabdji, who goes by the name Zozodia.

"Some men are afraid to approach me as a young woman, but they are wrong," she said. "All my beauty, all my belongings, I owe to my deity."