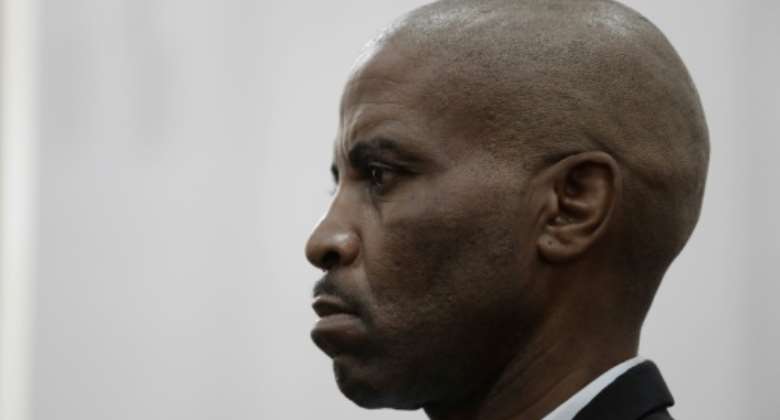 Zandile Christmas Mafe is suspected of starting the fire. By GIANLUIGI GUERCIA AFP

A South African court charged a man suspected of starting a devastating fire that gutted South Africa's parliament with terrorism, adding to robbery and arson accusations, as he made his second appearance in court on Tuesday.

Zandile Christmas Mafe, 49, was arrested around the parliament complex after the fire broke out on January 2 and appeared in court three days later.

He was initially charged with breaking into parliament, arson and intention to steal property, including laptops, crockery and documents, before the new terrorism charge was added Tuesday.

A new charge said the "accused is guilty of the offence of contravening the provisions of... the protection of constitutional democracy against terrorist and related activities", according to a court document.

The prosecution spokesman Eric Ntabazalila told reporters during a court recess that "we have added a sixth charge... the accused detonated a device inside parliament".

The blaze broke out in the Cape Town complex before dawn on January 2, spreading to the National Assembly, the roof of which collapsed.

Protesters outside the court building demanded his release saying he was a scapegoat.

Mpofu, one of South Africa's most famous lawyers, who has defended some high-profile figures, including former president Jacob Zuma, is seeking bail for Mafe.

In stark contrast to his first court appearance where he was bearded and dressed in a grey shirt with knee-length denim shorts, on Tuesday he came in clean shaven in a light blue shirt and a dark jacket.

Since his arrest, debate has raged in South Africa over whether Mafe, described in the local media as homeless, was responsible for setting the building on fire.

A group of around 30 people, picketed outside the Cape Town magistrate court demanding Mafe be freed, brandishing handwritten signs such as "Free Mafe", "He is innocent" and "He is not guilty".

One homeless person recounted the events of the night the fire started. He was sleeping on a street near the parliament complex and heard a sound like a car collision. He later suspected that was the break-in before the fire started.

A preliminary report by the city of Cape Town last week said the fire detection system appeared "faulty", that "sprinklers did not activate" and that they were last serviced in 2017, missing a February 2020 scheduled service.

It took scores of firefighters more than two days to extinguish the blaze, which tore through the wood-panelled assembly chamber where parliamentary debates are held.

No casualties were reported in the fire, but the extensive damage has shaken the country and forced the authorities to move the annual state-of-the-nation address to be delivered next month by President Cyril Ramaphosa to an alternative venue in Cape Town.