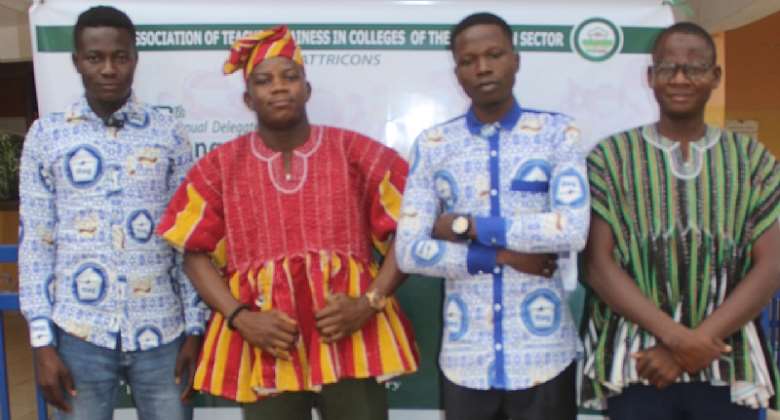 The Teacher Trainees Association of Ghana(TTAG) has held its Annual Delegates Congress in Tamale in the Northern Region.

The event was on the theme" The Impact of Educational policies on the Welfare of Teacher Trainees" and brought together stakeholders and associate partners.

He thanked government and other stakeholders who supported the association through the 2020-2021 TTAG year and urged the newly elected leadership to continue from where they stopped.

"I wish to thank the government and that the Ghana Tertiary Education Council(GTEC) and the Students Loan Trust Fund (SLTF) for their support of our activities. They have helped us a lot, and we can not forget that.

"I also wish to call on the newly elected officials to always work for hand in hand with the government of the day and that of all stakeholders in their quest to champion the course of trainees," he added.

The outgoing Treasurer who bemoaned the threats of delays in payment of trainees allowance called on the government to ensure that monies promised trainees to get to them on time since many students depend on it for survival.

He also urged government to address the concerns of the Colleges of Education Teachers Association of Ghana (CETAG) so that they would return to class for normal academic works to begin.

At the end of the Congress, Master Dzunu Jonathan was elected National President for the association.

Historically, teacher trainees organized agitations in 1970s and early 1980s on grounds of fair treatment and recognition both by the government and college authorities.

It is on record that in the 1970s, teacher trainees organize meetings to petition the government when they felt threatened as a result of their uncertainty about their status and qualification.

Again, there was a similar agitation for the recognition of trainees allowances in the early 1980s.

However, many beneficiaries of teachers of education afterwards had a deep seated conviction about what a union of teacher trainees could do for its members and nation at large.

Many were of the view that, even though the National Union of Ghana Students (NUGS) existed, their focus was more on issues affecting university students.

Many also agreed that teacher trainees need an association for the benefit of co-operation as expected in every human endeavour and some teacher trainees welcomed the idea as a very important tool whiles others were indifferent about the decision.

In the early 1990s teacher trainees forged to form the Teacher Trainees’ Association of Ghana (TTAG). This attempt faced stiff opposition from college authorities. Some employed all kinds of strategies before its germination.

Apparently, their contention was that such a union formed will make colleges of education, the then teacher training college ungovernable.

This notwithstanding, as also said by Nathanael Greene that ―we fight, we get beat, arise and fight again‖ between the end of 1994/95 and the beginning of the 1995/96 academic year, the ground became fertile for the formation of TTAG.

Subsequently, the association was officially, inaugurated colourfully on 3rd February, 1996 at the Presbyterian College of Education by Mrs. Elizabeth Addabor, the then Director of Teacher Education Division of the Ghana Education Service. Mrs. Addabor is equally on record to have offered her unflinching support to the founding fathers of the association.

It is worthy of notice that before TTAG was inaugurated, teacher trainees in the three Northern Region had a union called Association of Teacher Training Colleges in the Northern Sector (ATTRICONS).

TTAG has its motto as “A model for development” with the slogan TTAG – We mean well!

Its logo is the resemblance of “Nyansapo” store of Knowledge as the Akan tradition signifies that teachers are intelligent folks.

In 2001 at the 6th Annual Delegates’Congress at St. John Bosco College, Navrongo, congress then approved a written document as the association’s constitution.

Hottest Photo Reports
Catch up with all the political quotes from our politicians.
Advertise here
More from Regional News
ModernGhana Links
You will not be late if you walk according to his time and season —
U/E/R: Maltaaba Peasant Women Farmers’ Cooperative plant tree species
U/E/R: Maltaaba Peasant Women Farmers’ Cooperative trained in bushfire management
TOP STORIES