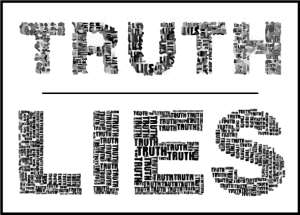 Discussion about fake prophecies, Mensah Thompson apologised to GAF for having lied about children that alleging had used the presidential jet, businessmen sitting on their TV shows to threaten others to unveil evidence in their procession instead of presenting it straight to the State prosecutors office to bring about behavioural change etc. raises once again the issue of Freedom of Speech as such and in certain jurisdictions in times of their development.

Public lies popular known as "fake news" have been around for ages even in rare circumstances that crippled a regime. Whether or not in politics lies showed be allowed as a legal tender to gain or preserve power has always been the centre of heated debates across the globe and history.

Observing space and history created lies run on short legs sooner or later being overturned by the truth. Societies overwhelmingly based on correct and true information are fast-moving societies less wasting time of people fighting each other over the true substance of the issues. The Bible command to be truthful is healthy to the individual mind and the effectiveness of society.

The issue of exposing lies is one side of a coin the other side, the punishment of "fake news" and personal lies on the other. Lies about persons or companies and institutions spoken or written by intentions or sloppy research harming the addressed to gain financial profit or making a name get eventually punished in different ways. Media Houses in the developed work need to pay financial compensation if found guilty besides airing or printing a corrective statement. After they have made their profit these Media Houses walk away seriously punished even often with a comfortable financial profit.

Underdeveloped countries are often poor in many ways. Freedom of Speech must be seen against the poor status of the nation. In that light, other steps must be taken to push society towards a better standing. Closing down Media Houses temporarily or permanently in severe cases if they continuously voice lies determined by courts as such in a set time frame must be the tool to keep the minds of the nation clean and not poisoned.

When e.g. politicians turn to lies occasionally or permanently it must be considered that such individuals will be punished by no longer being allowed to be part of the political circus. Any other thinking encourages them to use the tools of lies again and again which does not move the society ahead but sets it rather back.