Victory for hosts Cameroon as Cup of Nations kicks off

By Emmanuel BARRANGUET with Andy SCOTT in Douala
Cameroon 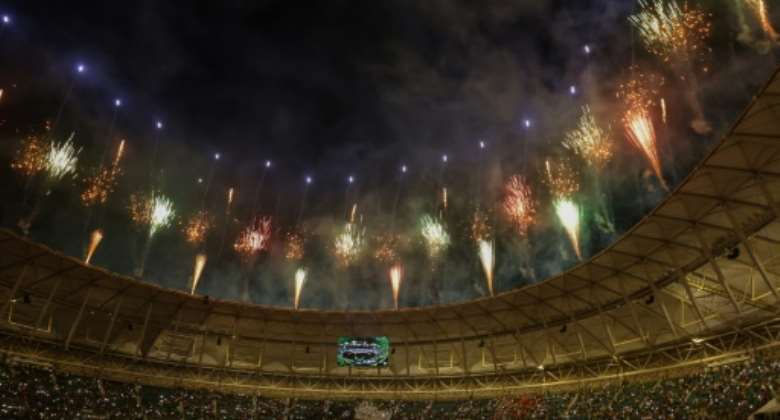 Fireworks go off at the Olembe Stadium in Yaounde after Cameroon beat Burkina Faso in the opening game of the Africa Cup of Nations on Sunday. By Kenzo Tribouillard (AFP)

Vincent Aboubakar scored a brace of penalties to give hosts Cameroon a 2-1 win over Burkina Faso on Sunday in Yaounde as the Africa Cup of Nations finally got underway after a build-up troubled by the coronavirus.

A raft of positive Covid-19 cases among competing teams has marked the days leading up to the tournament, while organisers chose to cap crowd limits at 60 percent of capacity, or 80 percent when the hosts play.

However, the party was not spoiled for the home team as they came from behind to beat the 2013 Cup of Nations runners-up at the 60,000-seat Olembe Stadium, where celebratory fireworks lit up the evening sky at the end of the game.

Burkina Faso were dealt a blow on the eve of the tournament when it emerged that coach Kamou Malo and several players had tested positive for the coronavirus, leaving assistant coach Firmin Sanou to take charge.

Nevertheless, Gustavo Sangare gave the Stallions the lead midway through the first half in the Group A match before Aboubakar equalised from the spot five minutes prior to the interval after a VAR review confirmed a foul by Bertrand Traore on Andre-Frank Zambo Anguissa.

The 29-year-old Aboubakar, who netted the winner in the 2017 Cup of Nations final against Egypt, then scored what proved to be the decider in first-half stoppage time and he was only denied a hat-trick by an offside flag after the break.

It is the perfect start for the Indomitable Lions as they seek to win their sixth continental title on home soil, as Cameroon hosts the tournament for the first time in 50 years.

"It was an important victory for us," said Toni Conceicao, the Portuguese coach of Cameroon.

"We knew that playing at home in the opening game was going to be a bit stressful and that there was a psychological weight on the players' shoulders, but they reacted well to falling behind.

"It wasn't a great performance, but winning was what mattered."

The football-mad Central African country was initially supposed to be the host nation in 2019, before being stripped of the tournament due to delays in its preparations, with Egypt taking over. The 33rd Cup of Nations was then postponed last year because of the pandemic.

Sunday's victory was greeted with celebrations around the country, with fireworks also lighting up the sky in the economic capital Douala, where car horns and vuvuzelas sounded in the city's streets.

Dancers performers during the opening ceremony at the Olembe stadium in Yaounde, the venue for Sunday's opening game as well as the final on February 6. By KENZO TRIBOUILLARD (AFP)

The match and opening ceremony were attended by Cameroon's 88-year-old President Paul Biya, who has ruled the Central African country for 40 years, as well as FIFA president Gianni Infantino and Confederation of African Football supremo Patrice Motsepe.

However, Aboubakar, the former Porto striker who these days plays his club football in Saudi Arabia, was the star of the show as Cameroon immediately seized the initiative in Group A before Ethiopia and Cape Verde met later at the same venue.

Burkina Faso captain Traore had called the Covid testing procedures a "scandal" after at least four squad members and coach Malo tested positive in the run-up to Sunday's opener.

African football officials have set down tough rules in a bid to prevent the competition becoming a super-spreader event, requiring teams to play even if just 11 players are available.

Gabon star Pierre-Emerick Aubameyang was forced to isolate in his hotel after testing positive on Thursday, while Senegal, Africa's top-ranked team, could be without captain Kalidou Koulibaly and Chelsea goalkeeper Edouard Mendy for Monday's game against Zimbabwe in the western city of Bafoussam.

"I know lots of coaches will have to get by without players because of the pandemic but it won't be an excuse," said Senegal coach Aliou Cisse.

Vahid Halilhodzic's Morocco are missing players due to Covid while their star striker, Sevilla's Youssef En-Nesyri, is carrying an injury.

Malawi, appearing at just their third AFCON, are due to play Guinea in Bafoussam before tournament debutants the Comoros meet Gabon.