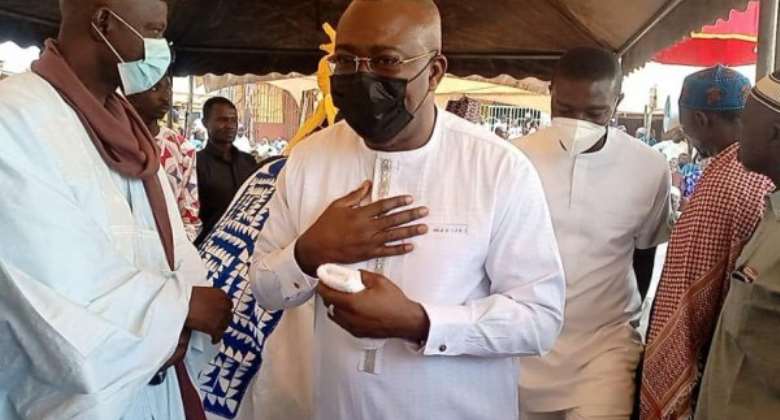 Some residents in the Mfantseman Municipality of the Central Region have rallied massive support for Mr Stephen Asamoah Boateng on the race to become the New Patriotic Party's (NPP) National Chairman.

Some of them expressed optimism that the country would see a facelift and improvements when Mr Boateng wins the race.

“Mfantseman developed rapidly when Asabee was the MP and we know we will experience the same when he becomes the NPP chairman”.

Sharing their thought on whether or not Mr Boateng deserved the seat, Mr Augustine Ward, a security officer at Anomabo recounted some initiatives and works Mr Boateng did during his tenure as the Member of Parliament(MP) of the area.

Some initiatives he pointed out were street electrification from Mankessim to Yamoransa, Saltpond water project, hooking most remote areas within the Constituency to the national grid, and facelifting the Mankessim roundabout.

Others were; Anomabo town roads and opportunities to the youth into the security agencies.

On education, Mr Ward revealed that Mr Boateng handed over a six-unit classroom block to assist effective education in the area, distributed mini desks to all schools in Mfantseman, computers, and system units to aid in Information Communication and Technology(ICT) training, and printers.

On women's development, he said Mr Boateng lobbied for MASLOG loans for market women to help improve their businesses and that gave a boost to the local economy of the area.

Maame Araba Otuwa, a fishmonger at Biriwa said Mr Boateng was the perfect choice for the NPP Chairmanship seat, adding that she had much faith in him to help change the country when given the nod.

She said Mr Boateng gave her three children full scholarships from Senior High School (SHS) to the University and many others in the area.

“ Asabee is a good man with a kind heart, the fortunes of the Party will change when he's elected as chairman, even as an MP he did a lot for me and my family”.

Maame Otuwa explained that the elephant fraternity should not hesitate to vote massively for Mr Boateng because these tough times needed people like him to help change things.

At Kormantse beach, the Ghana News Agency(GNA) saw some fisher folks singing praises to Mr Boateng when they heard his name.

Kwaku Ahor, a fisherman in an interview said Mr Boateng's goodwill and support to the people could not be over emphasized.

He said every resident of Mfantseman had had their share of his initiatives and support over the years.

“Everyone will vote for Asabee in every contest because he is a man of the people," he added.