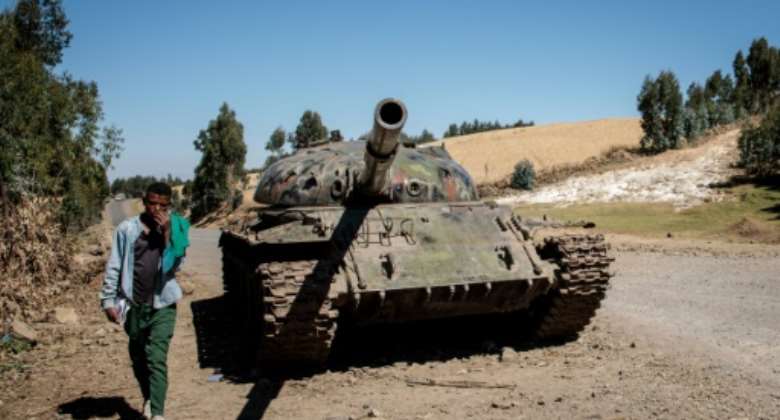 The conflict in Africa's second most populous country has killed thousands of people and created a deep humanitarian crisis in the north. By Solan Kolli (AFP)

Tigrayan rebels claimed Saturday that dozens of people had been killed in a drone strike on a camp for civilians displaced by the brutal war in northern Ethiopia.

Reports of the attack emerged just a day after the government declared surprise pardons for a number of detained opposition leaders, including senior Tigrayan figures, in what it said was a move to foster national reconciliation.

The amnesty has been welcomed by the international community as a possible way out of 14 months of brutal fighting between forces loyal to Prime Minister Abiy Ahmed and the rebel Tigray People's Liberation Front (TPLF).

Friday's announcement followed a dramatic shift on the battlefield, with the rebels retreating to their Tigray stronghold at the end of December in the face of a military offensive that saw government forces retake a string of strategic towns.

Although there appeared to be a lull in fighting since, the rebels have accused the government of continuing to conduct deadly drone attacks on Tigray.

TPLF spokesman Getachew Reda said on Twitter that an attack on the camp in the northwestern town of Dedebit "has claimed the lives of 56 innocent civilians so far".

His claim could not be independently verified, with access to Tigray restricted and the region under communications blackout, and there was no immediate response to requests for comment from Ethiopian government officials.

However, a senior official at the main hospital in Tigray's capital Mekele told AFP that the hospital in the town of Shire where the victims were taken had reported 55 people dead and 126 injured.

The EU also briefly referred to the air strike in a statement Saturday, saying it had killed and wounded many civilians.

Earlier this week the United Nations said three Eritrean refugees including two children had been killed in an air strike Wednesday on a refugee camp in Tigray.

The conflict in Africa's second most populous country has killed thousands of people and created a deep humanitarian crisis in the north, with fears it could tear apart a country where ethnic tensions are never far from the surface.

Tigray is the northernmost region of Ethiopia. By Aude GENET (AFP/File)

Tigray itself is under what the UN calls a de facto blockade that is preventing life-saving food and medicine from reaching its six million people, including hundreds of thousands suffering famine-like conditions.

While Friday's amnesty statement also spoke of national dialogue, it did not say if Abiy was considering any negotiations with the TPLF, the party that dominated politics for three decades until he took power in 2018 but is now considered a terrorist group by Addis Ababa.

Abiy -- a Nobel peace laureate who reportedly went to the battlefront in November to direct his troops -- called for "national reconciliation" and "unity" in a message for Orthodox Christmas.

However, in another statement Saturday he lashed out at "foreign and internal enemies" and described the TPLF as "snakes".

The amnesty coincided with a new peace mission to Ethiopia by US envoy Jeffrey Feltman, and was welcomed by the United Nations, the EU and the African Union, which has been spearheading efforts to end the conflict.

Among those pardoned were prominent politicians rounded up after deadly protests that erupted in mid-2020 over the killing of Hachalu Hundessa, a popular Oromo singer and activist.

They included Eskinder Nega, a veteran Amhara journalist and fierce government critic who has spent many years in prison under various administrations since 2005.

In all, 239 people were killed in the 2020 bloodshed that saw Abiy -- who had himself swept to power on the back of anti-government protests -- wrestling to keep a lid on the simmering ethnic tensions.

It was not immediately known if the TPLF stalwarts granted amnesty -- including one of its founders Sibhat Nega and former Tigray president Abay Woldu -- had been released by Saturday.

The fate is also unclear of thousands of people reportedly detained in sweeps that appeared to target Tigrayans under a wartime state of emergency declared in November.

African Union Commission chief Moussa Faki Mahamat described the amnesty as an "important gesture" and voiced hope it would pave the way for a "genuinely inclusive" national dialogue.

EU foreign policy chief Josep Borrell also welcomed the release of the opposition leaders and the establishment of a National Dialogue Commission as "positive steps", but said the IDP camp strike showed the fighting was still going on.

"All parties must seize the moment to swiftly end the conflict and enter into dialogue," he said.