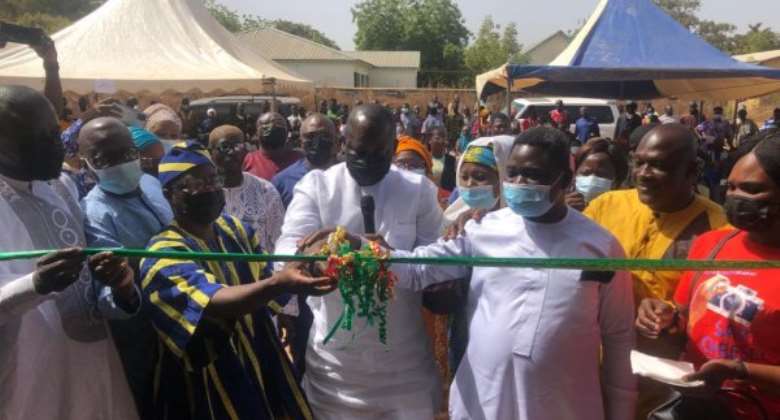 Hon. Amidu Chinnia Issahaku, the MP for the Sissalla East constituency has built an office in Tumu to keep in touch with the constituents.

The office, which began in the early part of 2021 forms part of the measures put in place to enable the MP interact with the constituents to promote development.

Speaking at the commissioning programme in Tumu on Friday, he pledged to run an open administration, which would ensure smooth development of the constituency.

He said though he was an MP on the ticket of the New Patriotic Party (NPP), he was there to serve all in the constituency and stressed the need for unity of a purpose to develop the area.

He said Tumu was one with a common goal and appealed to all to join hands to build Tumu to be safe haven for investors to relocate to the area for job creation.

"This office is open to the public. My secretariat would be here and even if I'm in Accra and whoever has an issue must not hesitate to come to the office to complain. Officers will always be here to receive complaints on my behalf during my absence.

“I am also accompanying it with a radio station and you can see the mast, which is almost completed. Very soon Sissalas will be getting a standard radio station that will match every radio station in Ghana and it's going to be one of the best in the North with a wide coverage”, he added.

He thanked the leaders and the people of the area for their continuous unity despite their differences in politics and described himself as a worthy representative of the people participating actively in the discourse of Parliament and on weekly basis getting in touch with the constituents.

“For one year I have visited all the heads of departments, visited most of the communities more than twice and acquainted myself with their needs and how I can be of support", he said.

For the promise of providing a farm mechanization centre, the MP promised it will be done this year and assured the constituents to remain positive.

Mr Chinnia said “There are things that I have been able to do in different front either by myself, common fund or through lobbying, which included; interventions in the educational sector, where I chose to extend a lot of support to increase the human resource base of the constituency.

Dr Hafiz Bin Salih, the Upper West Regional Minister described the project as a novelty and needed to be emulated by other Members of Parliament in the Region.