Protect your lives, gov't can use 'foul means' to reduce your numbers — NDC MPs warned 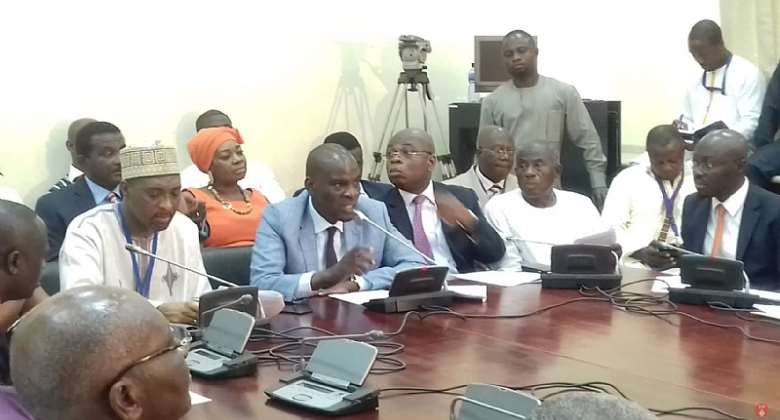 The 137 Members of Parliament of the opposition National Democratic Congress (NDC) have been warned to take their personal security serious.

Godwin Ako Gunn who is the Deputy National Communications Officer of the NDC, cautions the NDC MPs that the Akufo Addo-led New Patriotic Party (NPP) government can do anything to reduce their number in parliament, hence the need for them to prioritise their personal security.

He noted that the numerical strength of NDC MPs is a treasure the party cherish in keeping the Akufo-Addo government on its toes.

"May I use this opportunity to humbly ask our Members of Parliament to guard their lives with all diligence. You are our pride and the only check on the free-spending and looting NPP government.

"The NPP government will do everything possible to reduce our numbers by foul means," Ako Gunn wrote in a lengthy write-up on his Facebook wall.

Ako Gunn was reacting to attack on the Speaker of Parliament Rt. Hon. Alban Bagbin and Charges against Cassiel Ato Forson and two other former appointees over the purchasing of some ambulances during the era of ex-president John Dramani Mahama.

He believes that NPP government has resolved to prosecute former appointees of ex-President Mahama, including the Speaker of Parliament who was then former Heath Minister, due to their failure in getting the Haruna Iddrisu-led minority group in Parliament to approve the controversial e-levy.

"...When persuasion fails, prosecution must be applied...," he noted.

It remains a pride to enter public service and retire with no blemish. It becomes even better when people who worked against you rise in honor of your achievements and say in their hearts, we tried everything but you stood tall.

Being a speaker at a time when you didn't have the majority, nor the nominee of the president, takes something more than political backing of the minority. It takes personal character, achievements and people’s trust over the years to do it.

I have heard members of parliament on both sides singing his praise, father ooo father. This can only come with hard work and perseverance.

May I use this opportunity to humbly ask our members of parliament to guard their lives with all diligence. You are our pride and the only check on the free spending and looting NPP government.

The NPP government will do everything possible to reduce our numbers by foul means. May we at the constituency level, also have the wisdom to protect what we have as we pray for more in the days ahead.

Comrades, I laughed out loud when I heard the Attorney General has bought a new broom to reach out to every corner of the offices and ministries the RT Hon Alban Bagbin ever worked since independence to prosecute him along with some members of parliament.

Hon, the Prince of this world comes against you, but he has nothing in you. I love what 2022 brings along. Our elders say when the mouse becomes desperate and destructive, it falls into oil. I see Nana getting there this year.

Thank God the line was drawn straight and clear to him !!! When persuasion fails, prosecution must be applied. Hahahahhahaaaa !!!

I love the unity, strength and cooperation from the minority side in parliament. I will salute you any day for the tenacity you have shown and I know bigger things are ahead of us. Let me humbly appeal to those who also make negative headlines with the least opportunity to attack our MPs, even when they are told it is a misleading story. That is not the spirit of comradeship.

But for the advisers of the president, I weep for you. This is the time to wear a wisdom cap not an arrogant one. At this time where your ministers in parliament are going up and down locally and internationally, you shouldn't be flexing muscle.

I love the heart warming warning from my general secretary on the 40th anniversary of the 31st Dec revolution. Whenever impunity becomes law, resistance becomes a duty. What a tone for ALUTA CONTINUA!!! To the oppressor, i say sorry, your days are numbered. To the oppressed, I say better days ahead.

Hottest Photo Reports
Catch up with all the political quotes from our politicians.
Advertise here
More NDC News
ModernGhana Links
Don’t compare E-block to our infrastructural development – NDC advised
Teachers are now under threat in Ghana – NDC’s Osei Akoto
E-levy: 'Shut-up and learn from us" — Musah Superior blasts NDC
Youth must be desperate to retire failed Akufo-Addo — NDC's Julian Cobinnah to Ghanaians
We know your phony deals when you were Mayor; be wary of your utterances – Baba Jamal cautions Kojo Bonsu
2024: Mahama's name is too 'soiled' with 'corruption', 'women affairs'; floating voters will reject him, I'm the man – Kojo Bonsu
NDC flagbearer race: Mahama is a great gentleman but I will still contest him – Kojo Bonsu
Former TTAG National Treasurer eyes NDC deputy communications position in Sagnerigu
If E-levy has been passed then implement it – NDC MP to Kyei-Mensah-Bonsu
TOP STORIES

Government meeting with Minority over e-levy ends inconclusi...
42 minutes ago