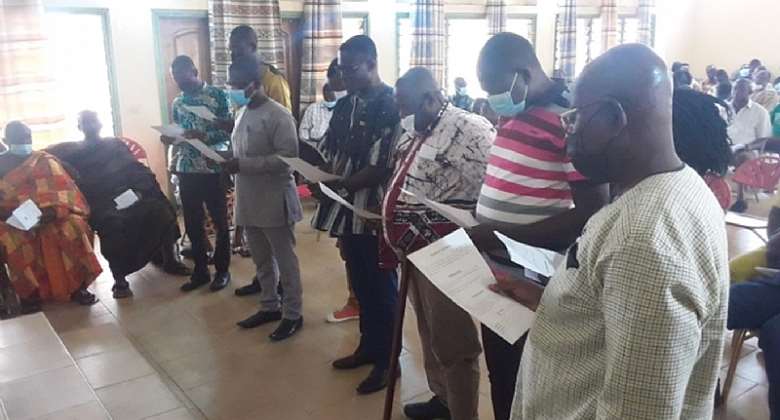 The Tano South Municipal Assembly inaugurated sub-committees of the Assembly including some board members of the various institutions.

The objective of the committees is to oversee the organization of meetings including other activities of the Assembly.

Inaugurated its sub-committees, Mr. Anthony Owusu - Amoako, the Coordinating Director of Tano South Municipal Assembly, commended the new committee members for their dedication and urged all committee members to come together in the discharge of their duties to ensure peace exists among them.

He informed the committee members to bring their ideas, knowledge and expertise together in order to improve the development in Tano South Municipal Assembly and beyond.

In his address, The Tano South MCE, Hon. Collins Offinam Takyi said the Constitution of Ghana makes emphasis on decentralization and hinted that the decentralization system makes the MMDAs plan and initiate programmes to address the challenges of the rural folks.

He indicated that the constitutional provision in the Local Government Act, 1993 (Act 462) was enacted to regulate the Local government system in Ghana.

According to him, all nominated Board Members and Committees Members were charged to exhibit good relationship to ensure effective performance of their work during their swearing-in ceremony at St. Joseph College of Education, Bechem. He also charged members to perform their core mandates in accordance with the law.

In a short speech, Mr. Jacob Adade Nitiamoah, the Economic and Development Planning Office of Ahafo Region who represent the Ahafo Regional Minister Hon. George Boakye, congratulated the new committee members for allowing themselves to be chosen for the task ahead.

He urged them to be submissive and do all they could to ensure Tano South Municipality acquires the needed development to improve the living standards of the people.