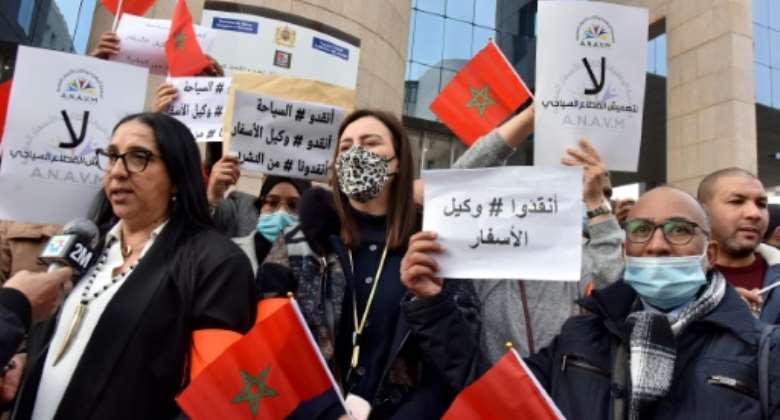 Tourism workers in Morocco protest against the closing of the borders as part of Covid-19 restrictions on January 4. By STR (AFP)

Moroccan tour operators threatened with bankruptcy due to border closures protested Tuesday, calling for the tourism industry to be "saved" as the coronavirus wreaks havoc on international travel.

About 200 industry workers demonstrated in front of the tourism ministry in Rabat, demanding the reopening of borders and talks with the authorities, citing the "dramatic collapse" of the industry in the wake of the pandemic.

"Have mercy on the economy and the people," one sign read.

Morocco suspended all passenger flights from November 29 until January 31 as a result of rising infections of the Omicron variant worldwide.

The restrictions have dealt a punishing blow to the North African country's vital tourism sector, already on its knees after two lost seasons because of the pandemic.

Lahcen Zelmat, head of the national federation of the hotel industry, said the situation for tourism was "catastrophic" and called for borders to be reopened and bank loan payments to be delayed.

Raja Ould Hamada, the owner of a travel agency in Marrakesh, said the most recent border closure was a "fatal blow" to the industry, claiming "other competing countries" such as Egypt, Turkey and the United Arab Emirates had benefitted.

Rabat recently promised a 2,000-dirham (about $216) monthly allowance to tourism workers for the final quarter of 2021.

Mozambican President to address Ghana's Parliament May 25
41 minutes ago