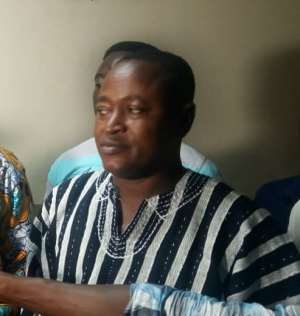 The leadership of affiliate political parties of the NDC are saying they are not impressed with the work of present executives constituting the party's National Executives Committee (NEC).

They have cited Hon Samuel Ofosu Ampofo, National Chairman for the party among the many executives whose poor contribution led to the party's defeat in the 2020 general election.

Addressing the media in Kumasi on Monday 3rd January 2022, the group called for the immediate removal of the National Chairman from office and other national executives of NDC.

Mr. Enoch Amoako, former Ashanti Regional Security Coordinator said at the briefing that Mr. Ofosu Ampofo is manning the affairs of the party like his Church of Pentecost "and with this style of leadership, there is no way the party can win the 2024 elections."

He stressed that per the historical records of NDC, any chairman who led the party when in power into opposition was kicked out of his chairmanship role.

"Chairman Ofosu Ampofo is not fit for this position anymore. He can serve in other capacities but for the chairmanship position, he doesn't deserve it anymore," he stated.

The former security capo added that the NDC needs radical changes from the highest hierarchy to the lowest to ensure the victory of John Dramani Mahama and for that matter NDC in 2024.

He indicated that even those in the reorganisation drive are not functioning at the moment.

"The role of the communication department is only centred on Sammy Gyamfi. All the other communication officers are no more working. We need a serious overhaul. If the NDC fails to overhaul the leadership, we will fail John Mahama," he intimated.