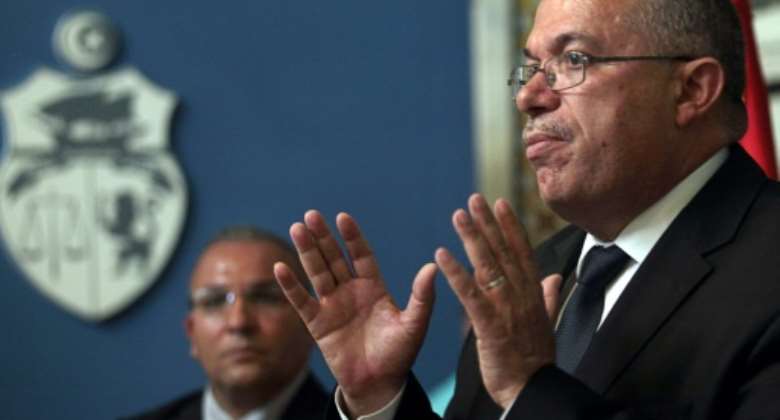 Concerning is mounting for the health of Tunisia's ex-justice minister and senior Ennahdha politician Nouredding Bhiri, seen in this picture from 2012, who was detained on Friday. By Fethi Belaid (AFP/File)

Detained Tunisian politician Noureddine Bhiri has been rushed to hospital in a "critical condition", activists and lawmakers said on Sunday.

Ennahdha is the largest party in the parliament suspended by Saied in a power grab in July last year.

Bhiri "is in a critical condition, he is in intensive care" at a hospital in the northern town of Bizerte, lawyer and lawmaker Samir Dilou told AFP.

Bhiri "faces death", the anti-Saied group known as "Citizens against the coup" said on Twitter.

"Kais Saied bears full responsibility for the life of Mr. Bhiri," it said, adding that he had been "rushed to the hospital in a very serious condition".

Ennahdha chief Rached Ghannouchi, who is also the speaker of the suspended parliament, released a letter addressed to Tunisia's president demanding urgent information concerning Bhiri's condition, and his release.

Following "the refusal to disclose where he is being held... we stress that it is your responsibility to reveal his current situation," Ghannouchi wrote in the letter published on the Ennahdha website.

He called on Saied "to enable a medical team and lawyers to visit him... and we ask you to urgently release him".

Mondher Ounissi, a doctor and member of Ennahdha's executive bureau, said that Bhiri suffers from several chronic illnesses, including diabetes and hypertension.

He has been "deprived of his medication" and "his life is threatened", Ounissi told a news conference, adding that Bhiri usually takes 16 pills a day.

Media reports earlier said he had stopped eating and taking his medication.

Another Ennahdha senior member, Said Ferjani, told AFP that seeing "a former cabinet minister treated this way... is dangerous for Tunisia and the region".

MP Saida Ounissi tweeted earlier that Bhiri had been kept in a "secret location" since his arrest, and that no charges had been levelled against him.

Tunisia's independent national body for the prevention of torture (INPT) said on Saturday that authorities had provided no information on Bhiri nor on Fathi Baldi, a former interior ministry official also detained.

The interior ministry on Friday said that two individuals had been ordered under house arrest, without identifying them.

It said the move was a "preventive measure dictated by the need to preserve national security".

Tunisia was the only democracy to emerge from the Arab Spring revolts of a decade ago, but civil society groups and Saied's opponents have expressed fear of a slide back to authoritarianism a decade after the revolution that toppled longtime dictator Zine El Abidine Ben Ali.

We cannot continue to depend on loans for development; let’s...
59 minutes ago