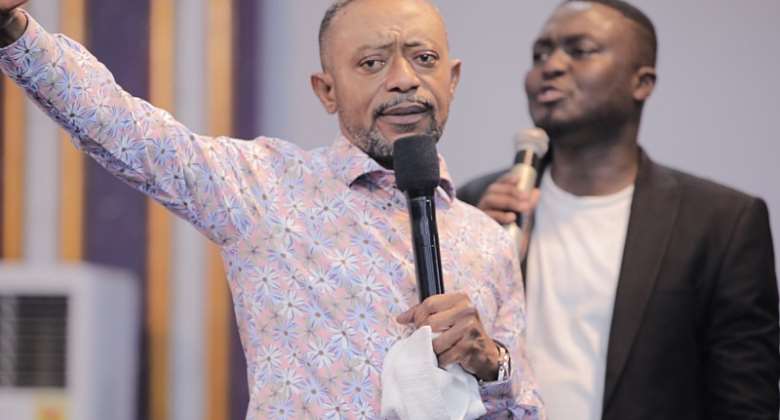 The founder and leader of the Glorious Word Power Ministry International, Prophet Isaac Owusu Bempah, has noted the importance of prophetic ministry in the country.

He claimed that prophecies saved the lives of several people including President Nana Addo Dankwa Akufo- Addo and Vice President Dr Mahamudu Bawumia in the past.

During his 31st night sermon on Friday December 31, he revealed that a few years ago, he had a revelation in which President Akufo-Addo was involved in a plane crash, leading to his death.

He said he proceeded to inform the leadership of the New Patriotic Party (NPP) especially the National Chairman Freddie Blay who then informed the General Secretary John Boadu about the news.

Two days of prayers were said to avert the calamity, he indicated.

He recounted that few weeks after the prayers, the President’s plane was reported to have caught fire, forcing the pilot to cut the journey short.

He believed that his prayers prevented the plane from crashing which could have ended the live of the President.

Similarly, Rev Owusu Bempah further stated, he had a revelation that the Vice President had been involved in an accident. After receiving the revelation, he said he moved to the Office of the Vice President and met Dr Bawumia’s spokesperson, Dr Gideon Boako and informed him about the prophecy.

“We did things to avert the calamity but I won’t mention what we did here,” he said.

He further appealed to the Inspector General of Police , COP Dr George Akuffo Dampare to invite men of God who believe in prophecies to explain prophetic ministry to him.

Mr Owusu Bempah believes that the IGP issued the order against the publication of the death prophecies following briefing he received from Pastors who do not believe in prophetic ministry.

The Police had cautioned Religious leaders in Ghana to be measured in their utterances, particularly the way they communicate prophecies, ahead of New Year Eve's services.

“It is also a crime for a person, by means of electronic communications service, to knowingly send a communication that is false or misleading and likely to prejudice the efficiency of life saving service or to endanger the safety of any person,” the statement signed by Superintendent Alexander Obeng, the Director of Public Affairs of the Ghana Police Service, added.

“A person found guilty under these laws could be liable to a term of imprisonment of up to five years.”

Friday's services across the nation was the first since Inspector-General of Police Dr George Akuffo Dampare took office.

He had met religious leaders over prophecies deemed to cause fear and panic in the nation.

That meeting was precipitated by a fake gun attack on popular musician Shatt Wale , who had later indicated he took that action as a result of a prophecy by the Founder and Leader of New Life Kingdom Chapel, Bishop Stephen Kwesi Appiah, on an Accra-based radio station before the Monday, October 18 incident.

The man of God, popularly known as Jesus Ahuofe, was arrested and later granted a GH¢100,000 bail .

The police admitted that they are not against prophecies especially in a country where the centrality of God is in the live of many.

“There should be no apprehensions, therefore, about undertaking the various activities.

“We ask only that everyone keeps within the law and is mindful of the welfare of each other.”

But Rev Isaac Owusu Bempah said during his 31st night preaching on Friday December 31 that “I will like to appeal to the IGP that if he needs briefings on the prophetic ministry he should invite some of us, not pastors who do not believe in prophecies,”

Hottest Photo Reports
Catch up with all the political quotes from our politicians.
Advertise here
More from Headlines
ModernGhana Links
Speaker Bagbin calls on Israeli counterpart in Jerusalem
Take steps to restructure our debt to avoid turning Ghana into Sri Lanka — Mahama to Akufo-Addo
Ghana in need of comprehensive debt restructuring to get back on track – Mahama
TOP STORIES

Speaker Bagbin calls on Israeli counterpart in Jerusalem
30 minutes ago