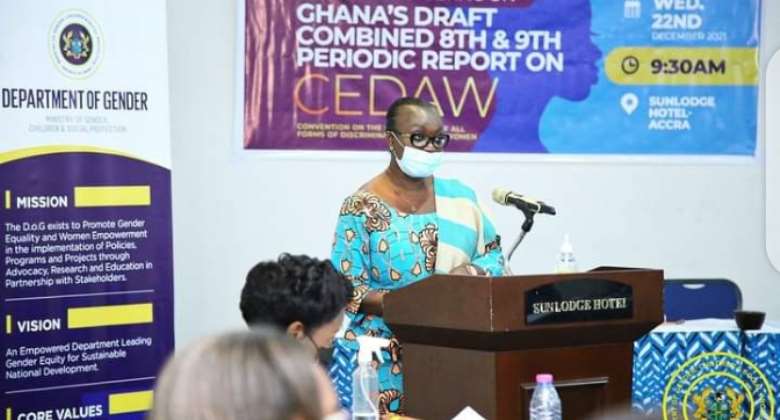 To achieve gender equality for sustainable development as part of the Sustainable Development Goals (SDGs) means eradicating poverty especially among girls and women.

Ms Faustina Acheampong, Director of the Department of Gender under the Ministry of Gender, Children and Social Protection with the mandate to ensure gender equality has said.

At the national validation meeting on Ghana's combined 8th and 9th periodic report on the implementation of the Convention on the Elimination of all forms of Discrimination Against Women (CEDAW), Ms Faustina said, "to achieve gender equality, we must fight the biggest challenges confronting the nation such as poverty and inequality."

According to her, putting an end to violence and discrimination against women and girls means making sure that no one is left behind.

The meeting is to validate inputs at a consultative meeting towards the finalisation of Ghana's 8th and 9th CEDAW report.

She emphasized that there is the need to work towards a significant increase in societal investments to close the gender gap and strengthen support for institutions in relation to gender equality and empower women and girls.

She pointed out that there's also the need to find innovative ways to include men and boys in the gender equality conversation for sustainable progress.

On his part, Dr. Edward Ampratwum, Head of Governance and lnclusive Development at United Nations Development Programme (UNDP) re-emphasized that "in order to combat violence against women, states have to be looking to tackle poverty and empower women by addressing power imbalances across societies and the underlying structural barriers to gender equality, such as unequal access to and control over resources and gendered division of labour."

He said, the COVID-19 pandemic has exacerbated the growth of gender based violence and continues to undermine the realisation of women's human rights and international human rights.

The UNDP he said is deeply concerned about the increasing spate of gender based violence and discrimination against women and girls across the world.

He urged other development partners to consider the implementation of CEDAW as an integral part of their work and not just the gender ministry.