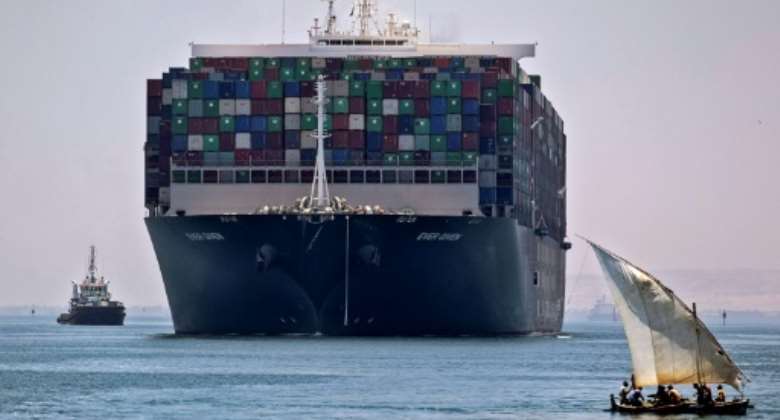 The MV Ever Given container ship sailing along Egypt's Suez Canal, pictured here on July 7. By Mahmoud KHALED (AFP)

Egypt's Suez Canal Authority said the key waterway netted record revenues last year, despite the coronavirus pandemic and a six-day blockage by giant cargo ship the Ever Given.

Connecting the Red Sea and the Mediterranean, the canal accounts for roughly 10 percent of global maritime trade and is a source of much-needed foreign currency for Egypt.

In 2021, some 1.27 billion tons of cargo were shipped through the canal, earning $6.3 billion dollars (5.5 billion euros) in transit fees, 13 percent more than the previous year and the highest figures ever recorded, Suez Canal Authority (SCA) chief Osama Rabie said.

In March, the Ever Given super tanker -- a behemoth with deadweight tonnage of 199,000 -- got stuck diagonally across the canal during a sandstorm.

A round-the-clock salvage operation took six days to dislodge it, and one employee of the SCA died during the rescue operation. Egypt lost some $12 million to $15 million each day during the canal closure, according to the SCA.

The Ever Given safely returned back through the canal without a hitch in August.

In November, the SCA said it will hike transit tolls by six percent starting in 2022, but tourist vessels and liquefied natural gas carriers are be exempted.