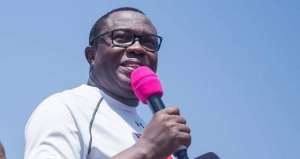 The National Chairman of the National Democratic Congress (NDC), Samuel Ofosu Ampofo says the Majority Leader, Osei Kyei-Mensah-Bonsu comes across as a leader who does not want to build consensus.

The former Fanteakwa North MP says Kyei-Mensah-Bonsu’s utterances and posture in the legislature have largely contributed to recent rancour and wrangling in the first year of the 8th Parliament.

Samuel Ofosu Ampofo indicated that for both sides of the house to build consensus and achieve maximum gains, Kyei-Mensah-Bonsu must turn over a new leaf.

“Minister for Parliamentary Affairs, Osei Kyei-Mensah-Bonsu owes us a duty to ensure that he brings his long experience and expertise in Parliament onboard to ensure that things go on smoothly. When I heard him attacking the Speaker at a press conference, I asked myself where we are headed.”

“I believe strongly that his actions and inactions are contributing to what we see in Parliament today. I hope that Osei Kyei-Mensah-Bonsu will resolve to turning a new leaf in this new year.”

He added that the Minority MPs will stop at nothing to defend the constitution. Chaos in Parliament

Ghana's fourth Republic was faced with what was essentially a hung Parliament after the 2020 elections.

The governing New Patriotic Party (NPP) and the opposition National Democratic Congress (NDC) won 137 seats each, with one independent MP.

On the morning Ghana's new Parliament was set to be sworn in, an almost five-hour deadlock over voting processes to elect a new Speaker of Parliament culminated in a brawl.

After the heated debate over the status of an opposition MP-elect who had been barred by a court from taking part in the inauguration of the new Parliament, there was a standoff over the voting process for the Speaker.

The NDC MPs insisted on a secret ballot in the belief that there were some NPPs MPs planning to stray from the party line as Alban Bagbin and Mike Oquaye vied for the seat.

For hours, scuffles broke out, led by the NDC legislators' Whip, Muntaka Mubarak, who tried to make sure his opposing Whip was not policing the ballot that would eventually see Alban Bagbin elected.

Amid the tensions, armed military and police personnel even stormed Parliament's chamber, adding to the chaos.

The year began in chaos for the Parliament and ended in chaos when another brawl broke out during a late-night session to consider passing the electronic transactions levy under a certificate of urgency.

The chaos started after NDC MPs tried to prevent Deputy Speaker Joseph Osei-Owusu from leaving his seat to vote after weeks of debate over whether he still retained his vote as the MP for Bekwai when sitting in for the Speaker of Parliament.

Record-breaking African teams bounce back from 2018 disappoi...
37 minutes ago