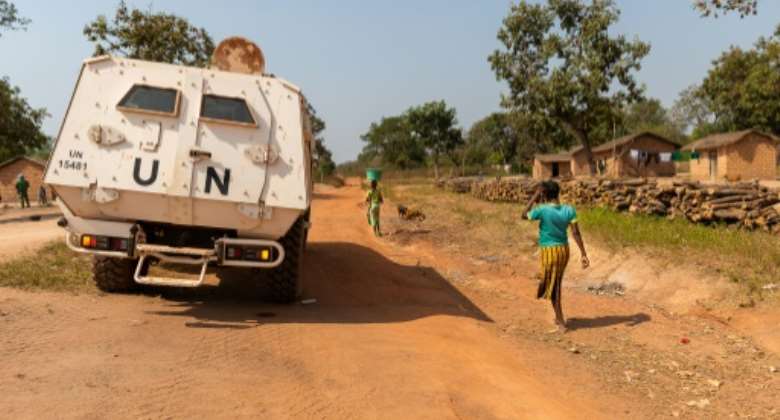 A UN armoured personnel carrier patrols on a supposedly safe road, avoiding potentially mined roads which have posed a growing threat to locals in recent months. By Barbara DEBOUT (AFP)

"We are afraid. We cannot know where the mines are hidden." It is a common refrain in conflict-wracked northwestern Central African Republic, where fear of being killed or maimed by explosive devices laid by rebels stalks the land.

The mines, which armed groups fighting government forces have concealed along countless thoroughfares, have also brought humanitarian action in the region grinding to a halt.

On the main drag in Paoua, a town some 500 kilometres (300 miles) northwest of the capital Bangui, a dozen taxi drivers wait for passengers outside the local market.

Their faces betray their anxiety as they wait under a blazing sun.

One of their number was recently killed after driving over a mine.

"He was the sixth to suffer that fate since the start of the year," fretted local driver representative Lagos Yandja.

"Our job has become a dangerous one," he told AFP.

Three months after a car he was in ran over a mine, Augustin Ndusha can still hear the sound of the explosion in his head.

Ndusha, a humanitarian aid worker for the Danish Refugee Council, was travelling between towns in the Ouham-Pende province bordering Chad and Cameroon.

As his vehicle bounced along a road rendered more damaged than ever at the height of the rainy season, it was impossible to see the mine in time.

Since August, according to the UN, mines have killed eight people in northwestern CAR, leading these boys to take to a supposedly safe road. By Barbara DEBOUT (AFP)

"I was sleeping in the vehicle. I heard a loud noise then a woman's cry," he recalled with a grimace.

"My colleague was covered in the blood of the driver, who was killed on the spot."

Mines have killed eight people, including two women and a five-year-old child, in the northwest since August, according to the UN mission in the country, MINUSCA.

'Taken everyone by surprise'

The country has long been plagued by militia violence, but in recent months armed groups forced out of the main cities have resorted to guerrilla tactics, laying mines to slow the advance of pro-government forces.

At the end of last year a coalition of the main armed groups -- which had already controlled some two-thirds of the country -- launched an offensive designed to force out President Faustin-Archange Touadera as he ran for a second term in power.

After several years of lower-intensity conflict rumbling along as a continuation of a civil war which erupted in 2013, recent months have seen a spike in violence.

The unrest in the country of almost five million people, which the UN ranks as the world's second least developed, has left hundreds of thousands displaced and engendered a major humanitarian crisis.

Cameroonian UN peacekeepers embark on a patrol of Paoua, in a region where three in five people are facing hunger as well as violence. By Barbara DEBOUT (AFP)

President Touadera, who was re-elected in a vote late last year, declared a unilateral ceasefire in October after gains against the rebels.

However, widespread insecurity persists in the northwest of the country, which is suffering a serious food crisis.

In January the rebels arrived virtually at the gates of the capital before being pushed back by government troops with support from Russian paramilitaries.

The government claims to have since recaptured 90 percent of the nation's territory, but still faces stiff resistance in the northwest from the 3R rebel group, one of the country's most powerful, which has resorted to laying mines at strategic intersections.

"They have taken everyone by surprise," said one expert in the area who asked not to be named.

On a main road on Paoua's outskirts, a MINUSCA convoy rolls cautiously along.

Inside their armoured vehicle a battalion of Cameroonian UN peacekeepers are silent.

As far as they know there are no mines on the road -- but they are on their guard.

"The presence of explosive devices limits the number of patrols and handicaps the mission to protect civilians," explained Noam Assouline, MINUSCA spokesman in the town.

On the road, a woman walks by with a bundle of grass perched on her head, looking carefully where she places her feet.

Sporadic food drops from the air have helped stave off shortages but are exceptional, according to the World Food Programme. By Barbara DEBOUT (AFP)

"When there was just fighting going on we would use the periods of calm in between to come in -- but the mines block access," said Mahoua Coulibaly, working for the World Food Programme in Paoua.

The WFP has organised food airdrops in the region, where 61 percent of the population are going hungry.

"But that remains exceptional," Coulibaly said.

UN forces have carried out two de-mining operations to date in the area but have had to stop for now "due to a lack of specialists", said MINUSCA engineer Major Javaid Khurram.

He added that those operations would resume "soon".

According to the UN humanitarian affairs office OCHA, 3.1 million people -- two-thirds of the population -- will require assistance in 2022.

Nima Clashes: I ran for my life after hearing gunshots - Res...
58 minutes ago