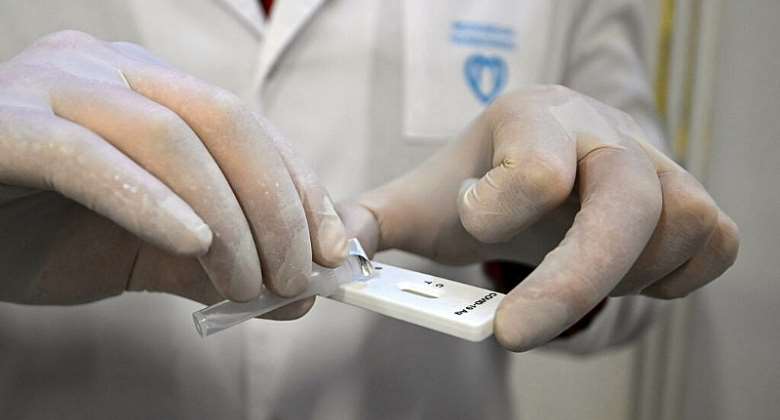 France has this week given the green light to supermarkets to sell rapid home test kits for Covid-19. However, according to American authorities, rapid tests known as "antigen" tests are more likely to give a false negative with the Omicron variant compared to earlier strains. They warn that only a molecular test (PCR) can give an accurate result.

In a statement issued on Tuesday, the US Food and Drug Administration (FDA) said it was collaborating with the National Institutes of Health (NIH) to study the performance of home tests, also known as "antigen" tests, against patient samples containing live versions of the Omicron variant.

The rapid antigen tests, based on a nasal sample, give results within 15-30 minutes and can be carried out at a pharmacy or at home. These tests are recommended primarily for people without symptoms.

"Early data suggests that antigen tests do detect the Omicron variant but may have reduced sensitivity," the agency said.

Sensitivity is a measure of how likely a test is able to detect a positive.

Previous testing had focused on heat-inactivated virus samples, rather than live virus which is better, and a drop-off in performance hadn't been spotted until now, the statement added.

The FDA said it would continue to authorize the use of antigen tests -- which work by detecting surface proteins of the coronavirus -- and that individuals should continue to use them in accordance with the instructions.

Some rapid tests, for example, instruct users to take two tests, a certain amount of time apart, in order to confirm a negative.

If a person tests negative with a rapid test but is thought likely to have Covid, either because of symptoms or because of likely exposure to the virus, they are still recommended to get a "gold standard" molecular test -- such as PCR.

These detect the genetic material of the virus. They are more accurate because they can make millions of copies of the virus' RNA, so even tiny amounts become detectable.

The news comes as the United States is facing a massive surge in cases that experts say is being under-captured as a result of a testing crunch, with long wait times for the more accurate PCR tests, and home kits in extremely short supply.

Last week, President Joe Biden announced that 500 millions rapid home tests would be available to order via a dedicated website as of the beginning of January.

In France, the sale of rapid antigen tests has now been extended to large supermarket chains, until the 31 January to cope with an increase in demand. Until now, these products had only been on sale in pharmacies.

French authorities have noted that although rapid home tests sold in France have a minimum sensitivity rate of 80 percent, their results may be less reliable if not carried out in the presence of a health professional.

Global spike in cases, but deaths down

Meanwhile, the World Health Organization said Wednesday that the risk posed by the Omicron variant is still "very high", after Covid-19 case numbers shot up by 11 percent globally last week.

More than 935,000 cases of Covid-19 were detected across the globe each day on average between 22nd and 28h December according to official figures compiled by AFP. This largely surpasses the previous record between 23 and 29 April 2021 with 817,000 daily cases reported.

"Consistent evidence shows that the Omicron variant has a growth advantage over the Delta variant with a doubling time of two to three days and rapid increases in the incidence of cases is seen in a number of countries," including Britain and the United States, where it has become the dominant variant, the WHO said in its Covid-19 weekly epidemiological update.

"The rapid growth rate is likely to be a combination of both immune evasion and intrinsic increased transmissibility of the Omicron variant."

Around 6,450 deaths per day were reported over the past week, the lowest level since October 2020.