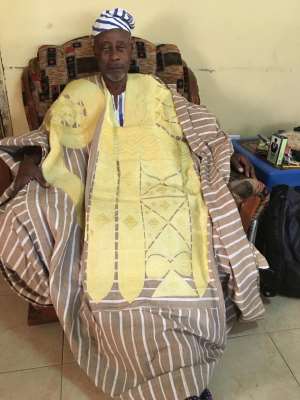 Alhaji Mohammed Umar, a Dagbon native resident in New Jersey, USA, has been nominated by the Northern Ghana Diaspora Community in the United States to be enskinned as the Dagomba Chief of the USA.

His nomination which was approved by Ndan Ya-Na Mahama Abukari II was announced at a meeting held by the Northern Ghana Diaspora Community in Jersey City, New Jersey.

Alhaji Umar would however be enskinned by Ndan Ya-Na Abukari II on a later date upon his arrival in Ghana, and subsequently at the Gbewaa Palace in Yendi, the Traditional Capital of Dagbon.

Announcing his nomination, Mr Alidu Andani, also a native of Dagbon said there was the need for every community home or abroad to be led by a leader, thus, the nomination of Alhaji Umar was important and in the right direction.

He said: "Without leaders, no community can be united, be peaceful, progressive and develop. Leaders are development agents and every community must be led by someone".

Mr Andani urged the Northern Ghana Diaspora Community to give Alhaji Umar the deserving attention and support, and respect the Chieftaincy title as a representative of Ndan Ya-Na Abukari II.

In his acceptance remarks, Alhaji Umar acknowledge that the Northern Ghana Diaspora Community in the USA needed some leadership to put them together, steer their affairs, find solutions to their challenges and help to promote development back home.

He thanked the Community for nominating him as their Chief indicating that he will justify the confidence reposed in him by promoting the culture and tradition of Dagbon.

He resolves to support the community to achieve its intended targets.

Dr Abubakar Mohammed Marzuq, a Representative of the Pishigu-Lana, Chairman of the Dagbon Development Fund (DDF), presented a comprehensive report on the Fund to the Community.

He said the DDF was aimed at raising GHC150 million to put up a befitting Palace and a Traditional Council, trained and empower Chiefs, promote Dagbon culture, and tradition and promote development across the length and breadth of Dagbon.

Dr Marzuq took the Community through the fund raising strategies, justification, sources and approach and levies aimed at raising the targeted amount.

Alhaji Mohammed Umar is a Dagbon native and a businessman resident in New Jersey, USA.

He is a Certified Practicing Accountant in the United States.

Alhaji Umar is also the Founder and Chairman of the Zaa Media Group in Tamale, which includes Zaa Radio and Zaa TV, serving the Northern Region.