A unique political story: Osinbajo and El-Rufai as the social conscience of the south and north for advancing democracy 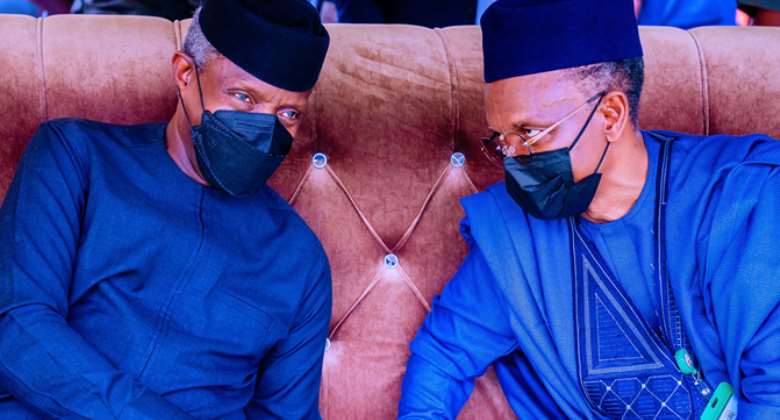 As a Psychological scientist, I do not engage in religious prediction. But in the manner of a psychological institutional analyst with a focus on African matters, I predict, unless Nigeria is no longer in existence that the next President will be Yemi Osinbajo with Nasir Ahmad el-Rufai as his Vice President.

64-year-old Osinbajo, as a leader in a growing and multifaceted society like Nigeria has largely kept a low profile during the Buhari administration. To help understand this man who is a heartbeat away from the presidency here are some things you should know about Osinbajo, his personal background, and his political psychology.

He is a reassuring pick to Nigeria’s Christian religious population and loved by the religious Islamic moderates in the North. Admired by the masses.

Yemi Osinbajo is a Lagos born Nigerian of Yoruba ancestry. Intellectually, he is skilled in History and Oratory. A law graduate with distinction from the University of Lagos. A graduate of London School of Economics, where he obtained a Master of Laws degree. A Professor of Law, with a focus in Public law at the University of Lagos. An expert on Conduct and Discipline through his work with the United Nations.

A senior Pastor at the Redeemed Christian Church of God. He is married to the granddaughter of Obafemi Awolowo, and they have children.

As one who is interested in political philosophy, he helped in the formation of the All-Progressives Congress along with other Nigerians. Osinbajo, helped design and produced a strategy for the new political party: "Roadmap to a New Nigeria", a document published by APC as its manifesto if elected to power. The focus of the document includes the need for free schools and addressing poverty and the needs of children and youths. A Vice President since 29 May 201 under President Muhammadu Buhari, and he once served as an Acting President in 2017 while the President was receiving medical treatment in London.

Osinbajo is currently in his second term with the President. He is known for his loyalty to the nation and the people. He is not a tribalist. He does not present as a weak or sick man. He is very young. In the North of Nigeria, he is seen as trustworthy, loyal, and honorable. But he is not a Yes man. On a psychological note, based on commentaries, he presents as a Nigerian with good political ethics. As a political figure, Osinbajo is firm to his uncompromising liberalism. Despite perceived religious and personality differences with his boss, Osinbajo has shown steadfast loyalty to Buhari. Osinbajo has gained fair criticism from all partisan groups because of his progressive national attitude. Osinbajo presents as one who is easy to make personal friends across political parties. At no time has Osinbajo shown any open eye regarding his political future as he tries to do his present work.

Along with this psycho-political mapping, in this write up, Osinbajo is three years older than Nasir Ahmad el-Rufai.

El-Rufai is a Kaduna born Muslim with modest background. As a child, he lost his father and fortunately for him he had an uncle who sponsored his early schooling. He is in expanded matrimony with children.

El-Rufai received a bachelor's degree in quantity surveying with first-class honors from Ahmadu Bello University in Zaria. It is important to know that while in Barewa College the house captain of his dormitory was President Umaru Yar'Adua, a known non-tribalist and a man of goodwill, simplicity, and humility, who died at the age of 58 from health complications.

El-Rufai has an MBA from Ahmadu Bello University followed by several professional and post-graduate training, in places like the Georgetown School of Foreign Service of Georgetown University in Washington.

He has as his area of focus advanced studies in privatization and leadership. A law graduate from the University of London; and has a master's degree in public administration from the John F. Kennedy School of Government of Harvard University. He received the Kennedy School Certificate in Public Policy and Management having worked as an Edward A. Mason Fellow in Public Policy and Management.

He has rich experience in quantity surveying consulting and has served in management positions with international telecommunications companies. A man whose political career started as an economic advisor to military head of state, General Abdulsalami Abubakar. He has worked with the World Bank and International Monetary Fund. Under President Olusegun Obasanjo, he served as director of the Bureau of Public Enterprises, and secretary of the National Council of Privatization.

As a Minister of the Federal Capital Territory during his tenure, he officiated over a sweeping transformation of the federal capital earlier damaged with corruption.

El-Rufai along with others led the reform of the Nigerian public service and at various times during his tenure as Minister, he oversaw the Federal Ministries of Commerce and Interior. He also chaired several high-profile cabinet committees that led to the establishment of a mortgage system in Nigeria and the National ID card system for Nigeria.

He once went into self-imposed exile and became a vocal critic of the Umaru Yar'Adua administration. He boldly returned to Nigeria in 2010 and was arrested for corruption charges by the Economic and Financial Crimes Commission (EFCC). He was cleared of corruption charges. In 2011, he joined party politics with the Congress for Progressive Change supporting Muhammadu Buhari’s campaign. Served as a deputy national secretary of the newly formed All Progressives Congress. In 2015 El-Rufai was sworn in as the Governor of Kaduna State, and he is currently in his second term.

He has had serious critiques in many areas such as not reportedly obeying court orders and known to be hard on human rights issues, journalists, and protesters but I see him as one who is open to public counseling especially as a progressive political figure.

In a dogged society like Nigeria, El-Rufai who is sometimes too stubborn and stern— all of which are admirable leadership characteristics will tie well with Yemi, a much more levelheaded man.

Psychologically, Nigeria in the last 20 years is crying to get some degree of sustained economy, education, welfare, health, security, and peace for the people. Osinbajo and El-Rufai seem to believe that one way to strengthen Nigeria’s peace and security is the establishment of state Police. Which should also include other decentralizations as in the areas of judiciary, Corrections, and many other essential systems.

Osinbajo and El-Rufai are fully conditioned in civilian leadership styles, a much more needed set of styles in a diverse climate like Nigeria.

They understand each other’s backgrounds in terms of progressive leadership. Their leadership style will help in navigating diversity. They know it is crucial that Nigerians understand their mission and give them affirmation, only then can they better contribute to Nigeria fully and help improve the quality of the people and systems. Psychologically, this is my hope and fantasy. Ah! tearfully we don tiya, we are tired. Time for a Positive Change.