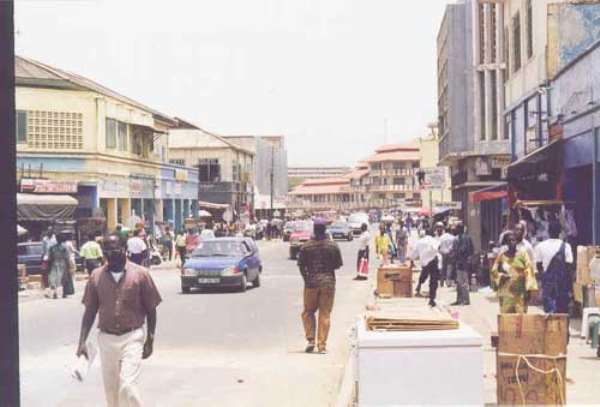 In some ways Accra reminded me of London. It has its own double-decker buses and boasts its own “Oxford Street”. And with its old fashioned traffic lights it looked liked a developing London, somewhat in the way a long-playing record and a compact disc are related. I arrived in Accra cautiously optimistic about my visit. I had read a travel review describing Ghanaians as perhaps the friendliest people in West Africa. I was impressed. But some Ghanaian friends had realistically advised: there ore those who target people arriving from overseas for their money and things, so do be careful. The country seemed determined to welcome its visitors even before they set foot on its soil. Looking through the window from your seat as the plane taxis to a stop at Kotoka International Airport, the huge sign “Akwaaba” flashes at you. It is the Ghanaian Twi word for “Welcome”. While waiting for our baggage to come through, I decide to get some cedis at the bureau de change. Ghanaians will often joke that you need a sack to carry around any appreciable sum of money. I soon understand what they mean. One British pound exchanges for about 13,000 cedis, and the ¢5000 note was the highest denomination in most circulation, although the government had in December introduced the ¢ 10,000 and ¢20,000 notes. With such a lopsided exchange rate, it does mean that your pound or dollar goes further, although hotel accommodation prices rival those of some of their counterparts even in the West. For the tourist who decides to arrange their own accommodation, getting a place used to receiving tourists helps. For one, the hotel staffs are used to what tourists expect and they are also able to provide useful local information. A few of the hotels and guesthouses have internet facilities available to their guests. But where they do not, Accra has many cyber cafés, with a number of them open 24 hours.

Ghana’s capital may not be the most beautiful city in West Africa, but it does have some attractions. Like the well kept Kwame Nkrumah Memorial Park, built in honour of the country’s first president, Dr Kwame Nkrumah. The park has his mausoleum and his statue flanked by carved flute players and water fountains. There are also the Independence Square and the National Theatre, which regularly features events.

The National Museum and the University of Ghana bookshop, said to be the country’s best bookshop, were closed during my visit. The latter presumably because it was the holidays. The university was worth a drive through, but not its botanical garden, which looked unkempt, except for the massive anthills along the route for which the ants take the credit.

But what one missed out on because a number of places were closed for the festive period was made up for by the usually congested roads being free of traffic jams. It allowed for an easy ride into inner Accra and a view of part of the Atlantic Ocean. Accra has a number of beaches and part of the Labadi beach, for example, borders the city’s only five-star hotel.

You can drive by but not linger about; I was told, to see the presidential villa, Osu Castle. Osu is the fashionable area of Accra, and of course, this is where the street popularly known as Oxford Street is located. Like its London namesake, the street has many of Accra’s up market shops, supermarkets and fast food chains. And if you like your shopping with same haggling, then there are the markets.

Attending a church service on a Sunday provided an opportunity of being on the “home turf” of the people. The service was conducted in English and Twi, one of the main Ghanaian languages. The preacher first spoke in English and then translated into the local language, but sometimes seemed to be so engrossed in his sermon, he would go on at length in Twi. When the person I was sitting next to realized there were a few strangers around him, he got up and had a message sent up to the-preacher.

A number of the Ghanaians I know seem surprised when I compliment their compatriots for being friendly and ready to assist… sometimes even when they were not sure what to do. True, not all of them would share in this compliment, but most of those I met would. In tourist speak, I can say of Accra: been there, done that, (didn’t get a t-shirt but) got Ghanaian chocolates.

Policy saturation, failure fatigue and frustration can make ...
21 minutes ago