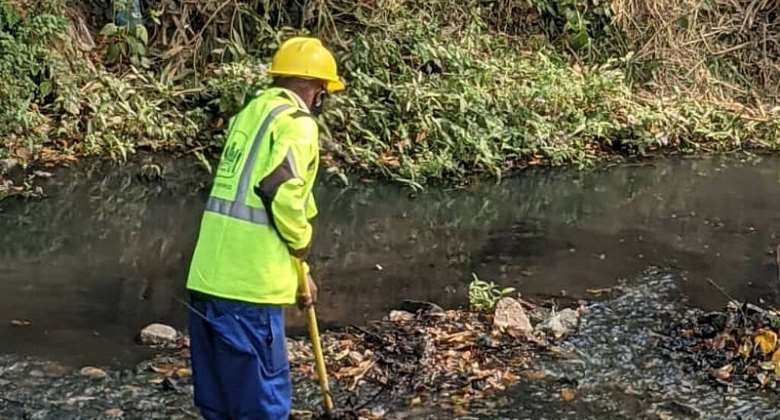 Concerns about the state of Malawi's Mudi River, a domestic water source which passes through Blantyre, the country's commercial hub, had fallen on deaf ears. Pollution from the industries which discharge waste into the river and sewage from the broken pipes is posing health hazards to the hundreds of thousands of people whose lives depend on the water from the river.

“We used to go and swim, wash clothes and play in the river when we were young. But now it's so bad that I cannot imagine people still use the water in the river with the whole dark substances and smell,” says Mario Chikunkhuzeni, 29, who was born and raised in Zingwangwa, a neighbourhood in Blantyre.

“People have complained about these things to the city council to which they did nothing to help,” he adds, saying the condition has been deteriorating over the years.

Art to the rescue

But one group of artists in Malawi who were concerned at the poor state of the river decided to put their skills to use-- Art Malawi organization dedicated more than two months to clear waste from the river.

With a team of cleaners, designers and sculptors, the organisation has managed to clear over 40 tonnes of waste from the river and produced assorted products.

The group has tried to clean and collect as much visible waste as they can with hope that this will serve as a model for the residents and the people who do business in the city, says Manota Mphande, founder of Art Malawi.

“What we've tried to do over a period of 68 days is to clean and collect as much visible waste on the section of the Mudi River,” says Mphande, while standing at the heap of waste that they had collected.

“This section was terrible. As you can see behind me, this is part of the waste that we've collected. In seven days, we've managed to collect over 40 tons of waste,” he adds.

The waste came in different sizes and shapes. There were torn clothes, remains from mosquito nets, bottles, and plastic papers, just to mention a few.

The river, which cuts across the middle of the Central Business Area and passes through an industrial zone bears the brunt of the illegal tipping. The water is mucky with dark substances from the things that people dump. A   smell wafts through the air, especially in the morning and evening.

Business must do its part, too

But pressure groups and environmental campaigners have been pointing at the manufacturing industries which are the upstream for dumping some toxic chemicals into the river.  Mphande believes both the residents and the companies should take the responsibility.

“It's very, I don't what word I can use…discouraging. We've got corporates that earn billions and billions of Kwachas on year basis and none of them have come in to take corporate environmental responsibility,” he said while calling on the people to play their part as well.

“We've also encountered individual waste. So as individuals, we need to take responsibility for our waste,” he adds.

He said art is an important tool and can be as a medium to raise awareness.

By using art to make things from the waste collected from the river, Mphande hopes people can also understand 'what we're doing in a visual sense'.

Blantyre City Council, the authority responsible for collecting the waste, says that while they accept that some of the waste left uncollected could possibly end up in the river as well, they lack the capacity to collect all the waste from the city.

The council says they only manage to collect 300 tonnes out of 500 tonnes produced every single day.

However, Gertrude Chirambo, chairperson of the environmental committee at the Council, lamented the behavior by the industries and people who she says dump toxic residues, human wastes from pit latrines and much more during the night.

“When we have all gone to sleep, that's when they empty their waste into the river. Some are smelly stuff. Some are chemicals that are killing the people because at the end of the Mudi River, as it runs down to the lower end, the people there they use the water to drink, to cook, to wash,” Counsellor Chirambo says.

She said much as laws are in place against the malpractice, companies prefer to pay the penalties rather than sort out their messes.

“Even though we've bylaws for people not to pollute our environment, we're asking these companies, especially in the Makata Industrial Site, not to pollute our rivers… please, please stop, because it's also killing our wildlife, birdlife, water life,” she says.

Art Malawi has been industrious with the waste they collected, making plastic bricks and producing carrier bags from pieces of clothes cleared from the river. Mphande says they will give away the first batches of the bags to less fortunate students.

Forestry and Natural Resources Minister Nancy Tembo, says she's impressed with what the art collective has accomplished in such short time, and that their actions should be impetus for the government and individuals to do more.

“They have done quite a bit of work but I think more has to be done and I think everyone needs to do their part to make sure that we bring Blantyre to step,” she says.

“And I think the people in this city of Blantyre, the city council and us as the government and also the private sector we should do more to assist and to our own deeds to make sure that we revamp this river,” she adds.