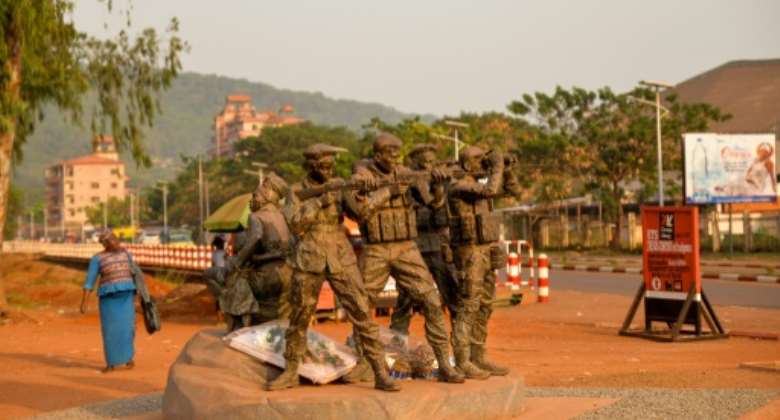 A monument near the University of Bangui pays tribute to Russian private security operators and fighters who 'died for the liberation' of the CAR. It depicts four armed men protecting a mother and her children. By Barbara DEBOUT (AFP)

A year ago, the president of the Central African Republic, Faustin Archange Touadera, appealed to the Kremlin to save his government.

As rebels advanced on the CAR capital Bangui ahead of presidential elections, Russia flew in hundreds of paramilitaries, helping Touadera to turn the tide.

But today, analysts say, the men from Russia's Wagner private security group who underpin Touadera's presidency are becoming a liability.

The entwinement has alienated the CAR's traditional supporter France, triggered allegations of atrocities and failed to defuse hostility to Touadera's rule, they say.

"After the Touadera regime came under Russian tutelage, it isolated itself off from its western donors and got rid of the opposition, while the peace initiatives have never borne fruit," says Thierry Vircoulon of the French Institute of International Relations (IFRI) thinktank.

A monument near the University of Bangui pays tribute to Russian private security operators and fighters who 'died for the liberation' of the CAR. It depicts four armed men protecting a mother and her children. By (AFP)

The CAR is facing a swelling humanitarian crisis -- out of a population of around five million people, more than three million will need aid next year, according to the United Nations humanitarian aid coordinator, OCHA.

The CAR's involvement with Wagner is being emulated farther north in jihadist-hit Mali, whose military-led government is also courting its help.

Russia, the CAR's ally since 2018, officially only acknowledges the presence of unarmed "military instructors" to train its poorly equipped armed forces.

But NGOs on the ground, as well as France and the United Nations, say that some of the Russians deployed in the country are Wagner operatives -- a claim denied by Moscow.

"Me, I haven't signed anything with any company called Wagner," Touadera said in September in an interview with the publication Jeune Afrique.

A win, but no victory

The CAR in 2013 plunged into a civil war along sectarian lines, which was then quelled by French military intervention, opening the way to Touadera's first election in 2016.

Russia in 2018 provided bodyguards for Touadera via a private company, Sewa Security. By FLORENT VERGNES (AFP/File)

In 2018, a peace agreement that brought rebel leaders into the government ushered in a lull in fighting.

But rebel groups, many of them claiming to represent religious or ethnic groups, retained control over some two-thirds of the country.

As Touadera campaigned for re-election in polls in late December last year, violence flared anew and a rebel coalition advanced on the capital.

Russian help -- supported by troops sent by Rwanda under a bilateral arrangement -- thwarted the attempt on power and forced rebels out of major towns, enabling the government to claim it had recovered control over most of the country.

But the pushback also unleashed allegations of bloody abuse.

The United Nations sounded the alarm about "major rights violations" by CAR forces and their Russian allies, including extrajudicial killings, torture and sexual violence.

In October, Touadera declared a "unilateral ceasefire", hoping that his stronger position would unlock a national dialogue to encourage peace.

Yet a timetable for the much-trumpeted forum remains unannounced, and rebel attacks on local populations and the security forces have continued, especially in the country's northwest.

Vircoulon, of IFRI, said the rebels were now engaged in "guerrilla" warfare after failing in their frontal assault on power.

Roland Marchal, an expert at France's Center for International Studies, said these attacks were likely to continue.

The rebels' apparent switch in tactics has badly hit the Russian paramilitaries, who have suffered "a large number of wounded", he said.

The CAR's mineral wealth ranges from copper and iron ore to gold and uranium. Pictured: A diamond mine at Banengbele in southwestern CAR, in 2015. By Patrick FORT (AFP)

A diplomatic source, speaking on condition of anonymity, said that Russians were wielding more and more clout in Bangui, notably in the ministries of defence, foreign affairs and finance, in particular the customs service.

In a report in June, US investigative NGO The Sentry said "transnational criminal networks" had "captured state institutions and taken entire communities hostage".

"This is a looting and killing machine, serving the interests of the Central African president and his foreign allies, in particular the Kremlin-linked private army known as the Wagner Group, as they plunder the country's gold, diamonds, and other mineral wealth," said The Sentry's co-founder, John Prendergast.