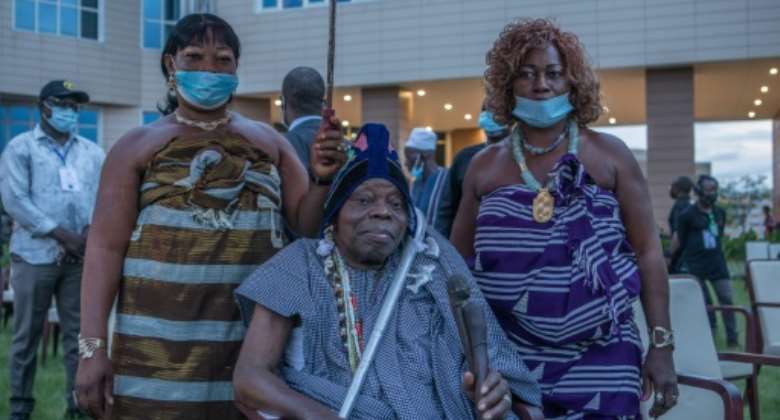 Benin's traditional kingdom of Abomey has been plunged into mourning after the death of its ruler, a royal dignitary said Thursday.

"The monarchy is in mourning. The king of Abomey, Kefa Sagbadjou Glele, returned to his ancestors on Friday, December 17," Dako Kpogbemambou Vovoweyenonsin, a dignitary in Zou, the southern region where the kingdom is based, told AFP.

"This morning, we went to the palace, where the bad news was announced. I am completely devastated."

Kings and other traditional chiefs do not enjoy constitutional power in Benin, but they wield great influence.

Around 30,000 mourners attended his sendoff the following month.

Sagbadjou Glele was the last direct grandson of King Glele, the father of Benin's last independent monarch Behanzin, who was deported during an anti-colonial struggle against France.

By tradition in Zou, a king cannot be declared as dead, but "descended on Abomey", an ancient kingdom that became the hub of the kingdom of Dahomey.

Sagbadjou Glele's death comes a month after his final public appearance during a ceremony in Benin's economic capital Cotonou to mark the return of 26 royal Abomey treasures -- some considered sacred -- that had been looted by French colonial troops in the 19th century.

"I cannot explain the joy that embraces me. These objects were intended from their departure to return. Sooner or later they would return so that the words spoken by our ancestors may be fulfilled," Sagbadjou Glele told AFP at the time.

No date has yet been announced for the ceremonies and rituals traditionally preceding the designation of a new king.