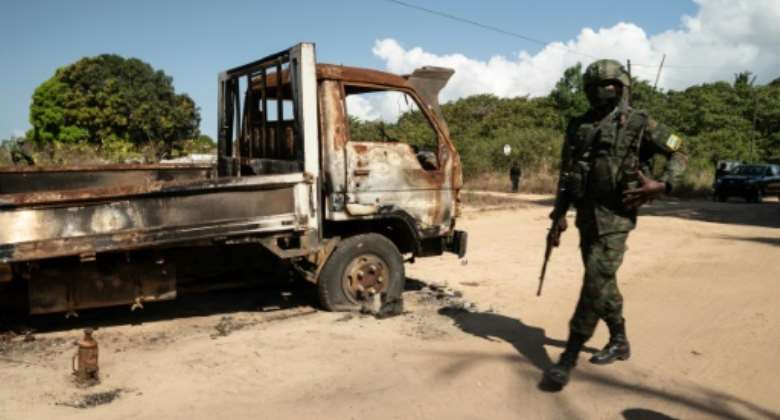 A Rwandan soldier walks by a burned-out truck near Palma in September. By Simon WOHLFAHRT AFP

A regional military force supporting Mozambican troops fighting jihadists in the north of the country said two rebel bases had been seized and 14 militants killed this week as part of an ongoing offensive.

Two bases near Chai, in the district of Macomia in Cabo Delgado province, have been captured in the operation, which began on November 22, the SADC Mission in Mozambique (SAMIM) said in a statement.

On Sunday and Monday, "14 terrorists were killed whilst eight women, three children and two elderly males believed to have been abducted by the terrorists were rescued," it said.

"The number of terrorists killed from the start of the offensive to date stands at 23," it added.

The SAMIM forces have suffered one fatality and two injured, while the Mozambican army has suffered two dead and four injured, it said.

Cabo Delgado, a gas-rich province bordering Tanzania, has been gripped by attacks by Islamic State-linked militants since 2017. By Kun TIAN AFP

Cabo Delgado, a gas-rich province bordering Tanzania, has been gripped by attacks by Islamic State-linked militants since 2017.

Atrocities include massacres, beheadings, the torching of homes and mass abductions, especially of girls.

Since July, more than 3,000 troops have been deployed from Rwanda and the 16-nation Southern African Development Community (SADC) to help the beleaguered Mozambican army.

On Tuesday, the Mozambican army said a rebel base had been stormed on Sunday and 10 insurgents had been killed.

South Africa on Tuesday identified the SAMIM fatality as one of its troops, Corporal Tebogo Radebe, 31.

A coffin draped in South Africa's national flag arrived on Thursday at an air base near the capital Pretoria, an AFP journalist saw.