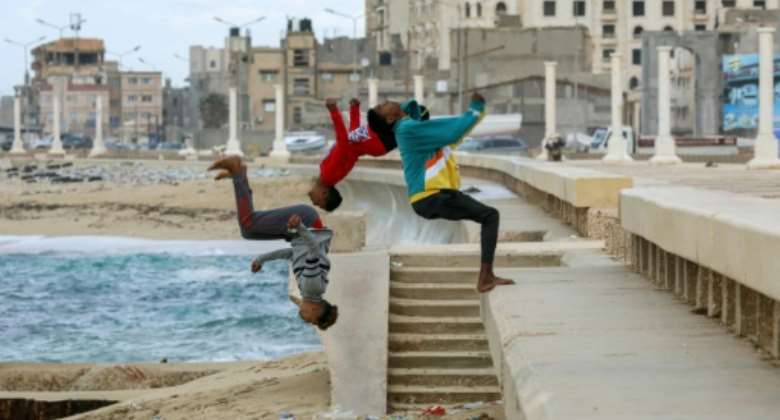 Youths practice parkour stunts along a beach in Libya's eastern second city of Benghazi on December 14, 2021. By Abdullah DOMA (AFP)

Libyans were meant to elect a president Friday hoping to help end years of turmoil, but the poll was delayed amid intense rivalries, UN failures and legal issues, experts say.

Analyst Jalel Harchaoui of the Global Initiative think tank pointed to "mistakes on the part of the UN and an attitude of extremely bad faith on the part of Libyan actors".

The ballot should have marked a fresh start for the oil-rich North African nation, a year after a landmark ceasefire and more than a decade after the NATO-backed 2011 revolt that toppled and killed dictator Moamer Kadhafi.

But officials on Wednesday said holding the December 24 vote as scheduled was impossible, with the electoral commission suggesting a month's delay.

"Preparations for the election had been taking place in a highly volatile climate characterised by disputes over electoral laws and the eligibility of candidates," Amnesty International said in a report.

The delay is a major challenge to the United Nations-sponsored peace process.

"From the outset, holding elections in Libya was going to be a dangerous gamble," said Claudia Gazzini, from the International Crisis Group.

"But the immediate trigger for this halt in the electoral process was a controversy over the leading electoral candidates".

Among them is Kadhafi's son Seif al-Islam -- a divisive symbol of the old regime, who is wanted by the International Criminal Court over war crimes allegations.

Eastern-based strongman Khalifa Haftar, another hopeful, is despised by many in the country's west for his failed offensive on the capital Tripoli.

Meanwhile, tycoon and interim prime minister Abdulhamid Dbeibah reversed a pledge not to stand -- a condition of his original bid for the premiership.

A 75-delegate UN-sponsored initiative known as the Libyan Political Dialogue Forum had been a key part of the political process, selecting Dbeibah as interim premier earlier this year.

Emadeddin Badi, also from Global Initiative, said that while one could "blame the national political actors" for the failures, it was "the responsibility of the UN mission to mediate" to ensure elections went ahead.

The electoral process began to come off the rails when Haftar-ally Aguila Saleh, speaker of the eastern-based House of Representatives, signed off on an electoral law in September without putting it to a vote.

Saleh "is responsible for the electoral laws, which are a real disaster", Global Initiative's Harchaoui said, adding that the problematic legislation was "absolutely crucial to explaining the failure of the elections".

Rivals say the move bypassed due process, and accuse Saleh of tailoring the law to allow Haftar to return to his post at the head of his self-styled eastern-based army if he lost.

Libya's eastern military chief Khalifa Haftar, seen here on November 16, 2021, one of the candidates for the presidential polls. By Abdullah DOMA (AFP)

After that, "the UN lost room to manoeuvre", Harchaoui said.

Wolfram Lacher, a Libya specialist at the German Institute for International and Security Affairs, criticised Kubis's "clueless backing" of Saleh's electoral law, but also put blame on French and Egyptian support for that approach.

Analysts said that despite alarm bells, many in the international community clung onto the scheduled election date.

"Elections, however, are not the silver bullet that can deliver political stability," warned Hamish Kinnear, from risk analysis firm Verisk Maplecroft.

People gather in Tripoli on November 19 to protest against the candidacy of Seif al-Islam Kadhafi, son of slain Libyan dictator Moamer Kadhafi, in presidential polls. By Mahmud Turkia (AFP)

"As yet, there is no presidential candidate who stands much of a chance at taking power without being opposed by at least one well-armed faction."

For Lacher, the crisis was effectively inevitable ever since Saleh backed the electoral law.

"There were many scenarios how it could fail, and no shortage of insistent warnings," he said. "It was like watching a train wreck in slow motion."