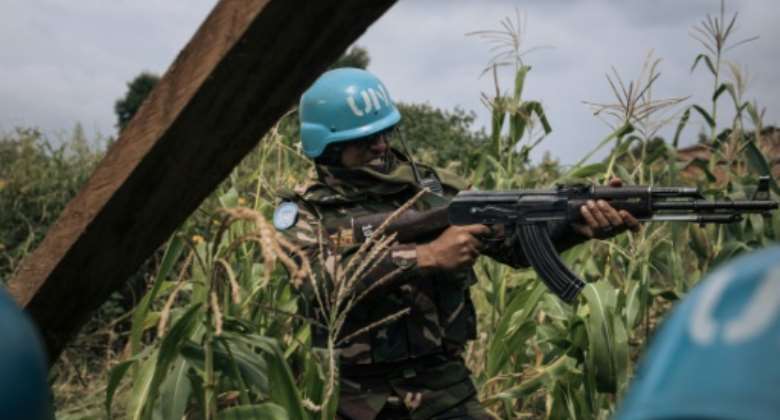 Automatic weapons fire crackled out, and Captain Miraj, a Bangladeshi peacekeeper, told everyone to run.

Around 20 local Red Cross workers had gathered in Dhedja, a village in the troubled northeastern Democratic Republic of Congo.

They had come to help bury bodies that had been rotting since a massacre three weeks earlier -- and the killers had now returned.

Abandoning their shovels, the panic-stricken helpers fled across fields and burned-out houses, cowering behind a wall as UN MONUSCO peacekeepers fired off random bursts into the high grass.

UN armoured vehicles edged their way to help the terrified group, coming under fire as they advanced.

After a 20-minute exchange of gunshots, silence returned. No-one was hurt and no-one was missing.

Bloodshed in the hillside villages of Ituri province has accelerated over the past two years, driven by a political-religious sect called CODECO.

Its innocuous-sounding name -- the Cooperative for the Development of the Congo (CODECO) -- belies a bitter ethnic feud between the Lendu, which the group claims to defend, and the Hema.

Fighting between the two communities flared between 1999 and 2003, claiming tens of thousands of lives before being quelled by a European Union peacekeeping force, Artemis.

Violence then resumed in 2017, blamed on the emergence of CODECO.

A child salvages school books from the Drodro camp for displaced people. The camp was devastated by militiamen last month. By ALEXIS HUGUET (AFP)

Since October, CODECO has stepped up attacks in the Djugu area, bordering Lake Albert and Uganda which lie to the east.

At least 82 people were killed in the last 10 days of November, according to a respected monitor, the Kivu Security Tracker (KST).

The UN vehicles stopped over at a devastated camp for displaced people at Drodro.

A child salvages school books from the Drodro camp for displaced people. The camp was devastated by militiamen last month. By Sophie RAMIS (AFP)

Less than a month ago, the camp was a home to 16,000 people. It was then attacked by militiamen on November 21, who torched shacks and shelters and killed 26 people.

Today, a few women and young children forage through the wreckage in search of food or salvageable materials, as flocks of crows whirl and caw overhead.

A child clutched a school exercise book on whose cover was written, in French: "Time for class!" -- a sad irony, given that the camp's schools have been closed since the attack, as is a hospital supported by the French medical charity MSF.

Thousands of people are crammed into a camp for displaced people on the sides of Mount Rhoo, 60 kms from the Ituri capital of Bunia. By ALEXIS HUGUET (AFP)

Makeshift shelters, devised from plastic sheets and branches, cover some 20 hectares (50 acres) around the base, where desperate people have fled violence.

"The area is completely hemmed in," said Audrey Riviere, the local coordinator for the French NGO Action Contre la Faim (Action against Hunger).

One of the few humanitarian workers there, Riviere had only been able to get to Rhoo by helicopter.

"There's less than three square metres (33 square feet) per person," she said. "People here lack everything -- water, food, places where they can go to the toilet."

At least three displaced people have been killed in the past two weeks as they ventured out of the camp to forage in nearby fields or fetch water.

"In spite of the risks, we have to leave the camp to look for food, but there's no safety," said Constant Ngaz, a trader. "At Rhoo, people are just waiting for death."

The World Food Programme (WFP) managed to get the first trucks to Rhoo on Monday. Last week, a truck driver seeking to deliver buckets and soap to Rhoo told AFP he had been extorted at CODECO checkpoints.