Too many gorillas? The great apes' hunt for space in Rwanda 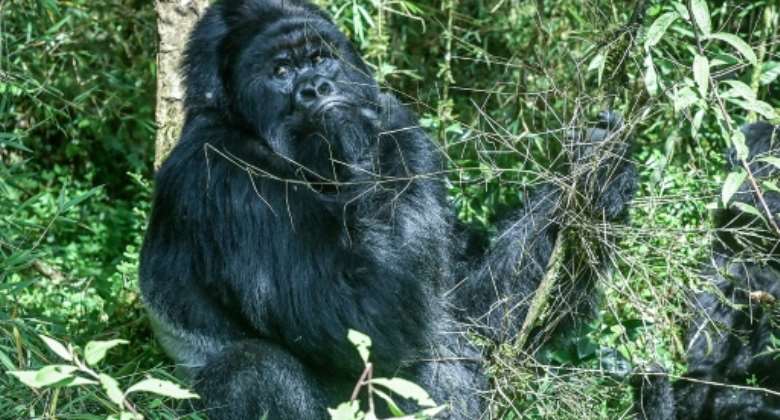 A huge male silverback gorilla nibbles on a tasty bamboo shoot before farting loudly, oblivious to his neighbours -- farmers working fertile fields a stone's throw away.

With hundreds of mountain gorillas in residence, the Volcanoes National Park in Rwanda is a conservation triumph. But this resurgence is not without consequences, as the majestic creatures now struggle for space to grow and thrive.

Straddling Rwanda, Uganda and the Democratic Republic of Congo, the Virunga range includes eight volcanoes in the heart of Africa's densely populated Great Lakes region and is, along with Uganda's Bwindi Forest, the world's only habitat for mountain gorillas.

Officials at the Rwandan park are proud of its success in regenerating the primate population.

"In the census we did in 2010, these mountain gorillas were 880; in 2015 we did another census that showed we have 1,063" in the Virunga massif and the Bwindi park, ranger Felicien Ntezimana told AFP, before leading a hike into the mist-covered forest where the animals live.

The mountain gorilla is now listed as 'endangered' by the International Union for Conservation of Nature rather than 'critically endangered'. By Simon MAINA AFP

Thanks to this revival, the mountain gorilla, known for its thick, shiny fur, is now listed as "endangered" by the International Union for Conservation of Nature, while other great apes remain "critically endangered".

The animal has come a long way since the 1980s when decades of poaching caused its population to plunge to just 250 across the Virunga range, and famed American primatologist Dian Fossey was murdered in the Rwandan park allegedly because of her anti-poaching efforts.

Stronger security measures and efforts to win over local villagers have helped turn the mountain gorilla's fortunes around.

Today, 10 percent of the cost of each $1,500 park ticket goes towards community projects while five percent is allocated to a compensation fund for villagers.

A local man displays souvenirs for sale at the entrance of Volcanoes National Park in Rwanda. By Simon MAINA AFP

Far from being hated and feared as they were in the past, the gorillas are now seen as key to the community's financial future, says Jean-Baptiste Ndeze, an elderly inhabitant of Musanze, a town bordering the park.

"Tourists throw money at them, which... comes back to us in the form of food, shelter and good livelihood," he told AFP.

While the tourism sector contributed $25 million to Rwanda's economy pre-pandemic, the park's success in conservation has led to unforeseen consequences.

Twenty-five years ago, the Rwandan authorities were monitoring about 100 apes in the forest. Today, about 380 gorillas call it home, according to an official count.

The primates are now more accustomed to humans. By Simon MAINA AFP

As a result of tourism and interaction with researchers, the primates are accustomed to humans, and they are increasingly unafraid to venture into populated areas as their own habitat grows cramped.

"We have seen gorillas more frequently coming out of the park and looking for food outside... also they tend to move further away from the edge of the park," said Felix Ndagijimana, who heads the Dian Fossey Gorilla Fund in Rwanda.

The results can be dire.

The powerfully built animal -- an adult male can weigh up to 200 kilogrammes (440 pounds) -- is vulnerable to human diseases such as influenza, pneumonia and Ebola.

Rising gorilla numbers have also raised the likelihood of fights between the primates which can often prove fatal for the species' youngest members.

After seeing population growth slow a decade ago, Ndagijimana and his colleagues carried out a study which showed a staggering five-fold increase in infanticides.

"Infanticides are a big problem because it can have a huge negative impact in the gorillas' population increase," he told AFP.

The problem is much more pronounced in Rwanda than in neighbouring countries.

Stronger security measures and efforts to win over local villagers have helped turn the mountain gorilla's fortunes around. By Simon MAINA AFP

Only one gorilla family lives on the Ugandan side of the Virunga range, while the Congolese park is "huge" compared with the Rwandan forest, says Benjamin Mugabukomeye from the International Gorilla Conservation Programme, a regional organisation.

In a bid to address the issue, Rwanda plans to extend its park, adding 23 percent more surface area over the next decade.

The ambitious project is due to start next year and will displace around 4,000 farmer households.

The authorities intend to compensate the displaced families and house them in newly constructed "model villages" -- with a prototype already visible in Musanze.

In addition to a huge school and a poultry farm, the village includes immaculate, fully furnished brick apartments -- with the government insisting that the move will benefit displaced farmers.

Although they may have little choice but to comply with an authoritarian state, some families living on the edge of the park are worried.

"This place is very fertile and it has enabled me to feed my family," one potato farmer told AFP.

The gorillas "are not a problem", he said, but he complained that "where they want to relocate us, the soil is not as fertile".