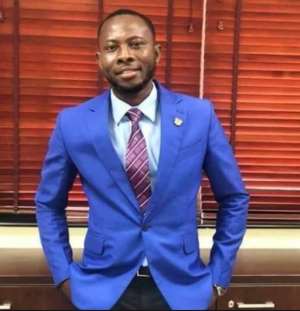 An NDC activist, Mr. Issifu Seidu Kudus Gbeadese who is publicly known for his prowess in writing on National issues, has intimated that the visit to the private residence of former President John Dramani Mahama by Mr. Gabby Otchere Darko is not an ordinary one.

He said this in a statement issued and copied to Modernghana News' Savannah Regional reporter, Ezekiel Abdul Aziz.

According to him, he suspect Gabby's visit was meant to first and foremost patronize the former President and to also set him up against the "unrelenting supporters across the country who have now seen the hero in him" and are ever ready to sacrifice everything the bid to support his come back.

"I suspect it was meant first and foremost to patronize you and set you up against the unrelenting supporters across the country who have now seen the hero in you and are ever ready to sacrifice everything in the bid to support your come back", he said in reaction John Mahama's Facebook post.

He continued, "in the midst of the heat, every capitalist will seek refuge and patronize his victims just to survive, that is exactly what Gabby is doing".

A VISIT BY GABBY TO PRESIDENT MAHAMA AT HIS PRIVATE RESIDENCE: THE BAD SIDE OF STATESMANSHIP.

Your Excellency, the incoming President of Ghana in 2025, President John Dramani Mahama,

I bring you season’s greetings from my lonely cave in the Laribanga mountains. As the youngest Imam in Ghana, I can assure you of my prayers and unwavering loyalty at all times.

Daddy, I have been one of the ardent defenders of your disposition on political matters anytime some of our people question the political sense of you playing safe and gentle when the facts of some cases and the circumstances that generated same don’t demand that you display any of the aforementioned personality of yours. I do so not because I am a blind supporter but because I can gauge your sense of judgment on such matters.

There is no contestation as to the outstanding statesman you are. In addition to this, you are someone who has experienced almost all the layers of political leadership and representation in Ghana. So, when you speak or take a position on any national matter, it mostly takes a third eye to evaluate its essence or otherwise. That is not to say you are immune from making mistakes in your judgements or positions on issues. You are human and by nature we expect you not to be infallible.

Daddy, I just read from your Facebook wall where you tried to summarize what actually transpired when Gabby mischievously visited you at your private residence. With all due respect Your Excellency, I am not a happy person and I know many of your admirers, some of who are NPP members are equally not happy with you. Gabby of all creatures at your PRIVATE RESIDENCE? Wow!

I read from some astute political jingoists who make the case that, anytime one’s action need a further explanation to make sense to people who ordinarily ought to understand on the face of it, then it’s better to opt not to take that action. This is Ghana, where the media is set to engage in issue-centering and agenda setting than to investigate and report from an informed central position.

In this game of politics and especially the kind of political environment Nana Addo and his NPP have created, it is very safe and better not to act than to act and later explain and justify your action. Nana Addo and his team of crony capitalists have succeeded in poisoning the political environment with mistrust to the extent that brothers and closed friends cannot trust each other any longer once they share different political persuasions.

To them, what matters is to make political profit out of every situation including the killer Covid. So, to the extent that their political interest is at stake, they don’t care about the immediate consequences of their action to ensure they get what they want. They can kill, they can maim, they can exile, they can paralyze the dreams of innocent and render thousands jobless, useless and homeless, just to achieve a single political objective.

Your Excellency, the visit of Gabby wasn’t ordinary. I suspect it was meant to first and foremost patronize you and set you up against the unrelenting supporters across the country who have now seen the hero in you and are ever ready to sacrifice everything in the bid to support your come back. In the midst of the heat, every capitalist will seek refuge and patronize his victims just to survive. That is exactly what Gabby is doing.

Your Excellency, in what capacity did Gabby visit you and in what capacity did you have to receive him in no less a place than your private residence? Even a stillborn in Ghana knows who Gabby is and what he’s capable of doing. I know you have security detail around you, but to the extent that these same group of people could set someone to kill you in church when you had the state security apparatus at your disposal as President, should inform you about what they can do this time that they have everything in this country at their behest.

I like to quote from Aseidu Nketia who opined some time ago that, when you dine with the devil, you do so with a long spoon. It is obvious that it is in political theories and the idealist world that the adage “we don’t have enemies in politics but political opponents” fester and can make meaning. In my world where political realism plays 100 against zero, I believe that out of every 10 political opponents (whether intra or inter), about 8 to 9 of them will wish me dead, paralyzed, weak, unemployed, homeless or mad. And someone who would wish you dead or can maim you in order to gain political advantage is not an opponent but an enemy. This is the reality in the contemporary world of politics especially in Ghana under Nana Addo, the cousin of Gabby.

The media reports which skewed the import of the visit and the twists and turns about its relationship with the deadly E-LEVY are not borne out of coincidences but something which was crafted, stage-managed and well executed to feed into the grand agenda of getting the NDC and you, President Mahama, in the bracket of those to be blamed for the E-LEVY. They want to share the blame and make useless the action of the NDC minority in Parliament on Monday, to get the killer e-levy crushed into insignificant proportions.

Your Excellency, when your government decided to call all stakeholders to Senchi for a national conversation around a national policy/agenda, the NPP as a party led by Gabby’s cousin openly refused to attend.

Gabby in the past attacked your person and likened you to “a maniac”. When you lost in 2016 and a meeting was convened at the instance of the Ashantehene to take a decision in respect an residence for you, Nana Addo, Gabby and their NPP betrayed the trust and acted deaf when they issue came up for clarification. In fact, you were practically thrown out of your residence with drones monitoring how you pack your luggage back to BOLE. They lied that the Vice President was sleeping outside because you decided not to vacate the official residence for him, but in the end, it was the Senior Minister who packed into that residence. These are the people who now want a meeting with you to discuss some so called issues in a so called NATIONAL INTEREST. These are people you now entertain around you? Remember how bomb-throwing came to be part of our political history and learn some lessons from same. Don’t trust them!

Gabby is one of the wily persons in the NPP who many people would wish to be charged and prosecuted for some scandals that happened in this government, including but not limited to PDS scandal, the Agyapa heist and many others where his invincible octopus hands were seen manipulating and purportedly cooking deals. This is a guy who cannot still see you, Mahama as someone fit to rule Ghana as he intimated in the past with very strong language on his social media handles. Such a person in this critical times is seen around same Mahama when the masses don’t want to see his face. Isn’t that annoying?

Daddy, I know we cannot change the personality God has given you, but you can at least do something about things that can hurt people who will die to make you happy. It should not be about you, your orientation and belief systems, but about the masses who hinge their hopes and dreams on you. Majority of the people are patiently waiting, working and praying for your come back. All what most of these people want you to do when you eventually win power is, to prosecute some of the officials in this government who are the architects of the naked thievery and loaded corruption; the name of Gabby cannot escape the list. The people want to see a hard-hearted person in you who is ready and willing to execute the above duty. You need to let them know you have a soft heart as a statesman but you can be hard when it comes to some issues. All these begin with your actions now.

I know you want to exude the father figure in you to prove that you can unite this country beyond its current politically polarized state, but in doing so, you don’t have to make the grievous mistake of letting it into your belief system that it takes a “father for all” figure to run Ghana on the oasis of peace and unity. Let everyone stay where they belong, enough of this thing call “NATIONAL INTEREST”. After all, the President said they have majority in Parliament, so no need for consensus building.

I wish you Merry Christmas and a prosperous New Year in advance. My love and loyalty for you are still intact.