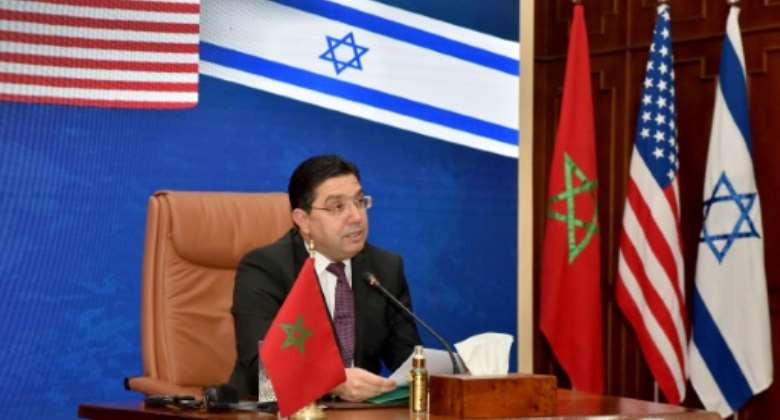 Moroccan Foreign Minister Nasser Bourita takes part in a virtual meeting with his US and Israeli counterparts. By - (AFP)

Morocco, Israel and the United States on Wednesday marked the first anniversary of the US-sponsored resumption of diplomatic relations between the North African kingdom and the Jewish state.

During a videoconference, the foreign ministers of the three countries -- Nasser Bourita, Yair Lapid and Antony Blinken -- welcomed a partnership aimed at establishing what the US secretary of state called "an achievement that has deepened ties, partnerships, and avenues to pursue shared goals".

Bourita said Rabat was committed to help achieve "a lasting peace in the region".

Morocco renewed official relations with Israel in December last year, two decades after it cut ties with the outbreak of the second Palestinian intifada, or uprising.

The rapprochement came amid a string of normalisation deals between Israel and several Arab countries, brokered by the administration of then US president Donald Trump.

On Wednesday, Blinken hailed what he called "a positive step for the region as we aim to widen the circle of peace".

Bourita also accepted an invitation from Lapid to visit Israel "as soon as possible".

Despite pro-Palestinian sympathies in Morocco, the renewal of relations with Israel did not spark major protest, as Washington at the same time recognised the kingdom's sovereignty over the disputed Western Sahara.

Morocco controls most of Western Sahara and considers the former Spanish colony part of its sovereign territory, while neighbouring Algeria backs the Polisario Front independence movement.

Morocco and Israel had previously established diplomatic relations in the early 1990s.

A large Jewish community once flourished in the kingdom, and a year after ties were restored, normalisation is proceeding apace.

Israeli Defence Minister Benny Gantz made an unprecedented visit last month that saw the signing of a security pact which angered Algeria and the Palestinians.

Media in both countries have since reported on Moroccan acquisition of Israeli defence technology.

Israel's Economy and Industry Minister Orna Barbivai is also expected to visit early next year, media in the kingdom have reported.