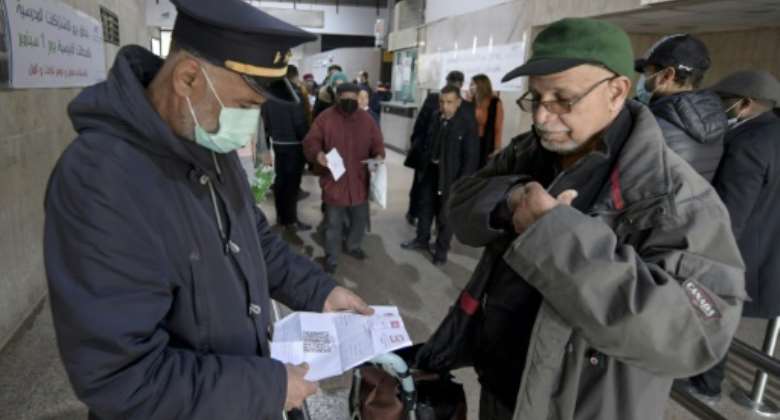 A public transport employee checks a passenger's vaccination pass at a railway station in Tunis. By FETHI BELAID (AFP)

Compulsory vaccination passes aimed at limiting the spread of Covid-19 came into force in Tunisia on Wednesday, despite some popular opposition and criticism from rights group Amnesty International.

Only those presenting a vaccination pass and their national identity card are now able to access cafes, banks, shopping centres and state institutions.

Dozens of people protested in central Tunis on Tuesday and Wednesday against the measure, which was decided by President Kais Saied in October with the aim of speeding up the country's vaccination campaign and limiting the spread of the virus.

The presidential decree imposes penalties on anyone in the public and private sectors who refuses to obtain a vaccination pass.

On Tuesday, Amnesty International urged the authorities to suspend application of the decree, saying it contained provisions which violate human rights.

"The Tunisian authorities must not implement the new decree-law until they have amended it to ensure the vaccine pass requirements do not violate international human rights law by needlessly threatening the livelihoods of Tunisians by inflicting unduly harsh penalties for non-compliance," the rights group said.

Government meeting with Minority over e-levy ends inconclusi...
49 minutes ago