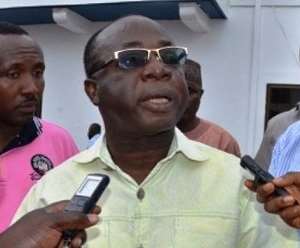 Political party is an entity which thrives on grassroots participation of every single person that believes in ideals it stands for. Sometimes, there are others who might not, necessarily, be attracted by ideological considerations but rather attraction the organization portrays through policies, programmes and conduct of decision-makers.

I have come into contact with ordinary people who tell me they are attracted to the NPP because they find the party’s colour appealing. Others are attracted by just the demeanor of the man Nana Addo; and this was on display during the 2016 electioneering campaign where I had the rare privilege to be a member of Nana Addo’s campaign team as an Aide.

I remember an incident with then-flagbearer Nana Addo on the 2016 campaign trail where upon arrival at Tarkwa at 2am in a heaving downpour, a young girl approached us, burst into uncontrollable crying and said “I have completed JSS for two years now but I am still at home because my parents do not have money to pay for my SHS education so I am praying for Nana Addo to win so he will actualize FREE SHS for some of us to continue our education”.

For such a person, how internal structures of NPP are managed, definitely, does not mean anything to her. Her motivation for being attached to the party is a policy alternative propounded by then-flagbearer; and like I have stated already, there are other millions of ordinary Ghanaians who might not be officially associated with the party but are attracted by policies and image it projects.

I have always reminded appointees of the Nana Addo administration and officials of the NPP about what he told us, (the national communication team) at the party national headquarters when the verdict of 2008 did not go in our favor, thus “FOR THE GOOD PEOPLE OF GHANA TO REAP THE BENEFITS OF DEMOCRATIC GOVERNANCE, THE NPP, WITH ITS ROOTS IN THE DANQUAH-BUSIA-DOMBO TRADITION MUST GOVERN FOR A PERIOD OF NOT LESS THAN 20YEARS, CONSECUTIVELY”.

That opportunity, once again, eluded us in 2012 but with determination and resilience, the good people of Ghana bought into our message, spearheaded by amazing display of energy in campaigning by then flagbearer Nana Addo, and gave us the privilege to serve them.

And I deliberately chose the word “PRIVILEDGE” to stress home the fact that political power belongs to the governed and therefore can be taken away at any point in time.

The sure-bet to maintain power is doing what is in the best interests of the people, but not what those in authority think they can force down the throats of the governed.

It therefore stands to reason that, to ensure NPP stayed in power beyond the 8-year cyclical one-step-forward two-steps-backwards between NPP and ndc under the 4th Republican dispensation in order to actualize the dream Nana Addo told us about in 2008, we must do things in ways that will engender trust, build hope, consolidate credibility and enhance image of the NPP.

Now, in 2008, the NPP was in power and processes leading to selection of parliamentary candidates for the 2012 elections were characterized by misunderstandings with resultant effect of others going independent.

Indeed, we had instances where some individuals the party wanted to protect out of good intentions, rather resulted in others being dissatisfied, going independent and actually winning.

In the end, it had a rippling effect on our ultimate electoral fortunes as a result of voter-apathy. The ndc suffered a similar fate during processes towards 2016, and they were trounced.

On many occasions, I ran a lot of commentary on processes leading to our 2020 parliamentary primaries when issues of alleged denial of nomination form to some prospective aspirants in some constituencies were the order of the day.

We heard reports of constituency executives responsible for issuing nomination forms, either going into hiding, or, the forms running out.

Indeed, one can be spared for going into hiding at any point in time, since we enjoy freedom of movements as guaranteed under the 1992 constitution.

However, nominations forms cannot be said to have ran out, when the quantity supplied to a given constituency actually outstrips the number of those that have picked them. And this is where I had serious issue with managers of the process, the national executives .

For example; if 10 nomination forms have been sent to a constituency and 7 aspirants have gone to pick, what was the point coming out with a directive to others who have been told the forms had ran out at the constituency, to go to regional and ultimately national to secure a form, instead of calling the constituency executives to order?

Is it not when the numbers of prospective aspirants at a given constituency actually outstrip the quantity of forms supplied, that, others can be asked to go to regional or national?

And even if there is more demand at a given constituency, couldn’t official request be made to national or regional for extra in order to spare prospective aspirants the hustle? The submission was characterized by its own peculiar shenanigan encumbrances.

The vetting also did not go without uproar: Dr. Lawyer Addison, for example, was in the spotlight, generating a lot of contesting intra-party inferno.

From what I heard, he was disqualified on the grounds of not knowing every single polling station in the constituency he intended to represent in the August House. He was also said not to have “nurtured the constituency and not known by the constituents”.

Now, my problem with those reasons for which Lawyer Addison was disqualified is simple: for an individual to qualify to contest primaries of NPP, he/she must be;

Absolutely nowhere in rules/regulations governing the process, is it stated that one must know, off-the-cuff, every single location of polling station in a given constituency, as a pre-requisite for contesting the primaries.

But if we are to insist on this requirement, then, it stands to reason that a regional officer is to have at his/her finger-tips, the number and location of every single polling station within the region; and this can be stretched to national officers.

Akwatia experienced acrimony of apocalyptic proportions because the grassroots, possibly, wanted a candidate other than the one we presented. And in the end, we lost the seat.

Today, the MP for Fomina has become the messiah of NPP, following a knife-edge parliamentary results. But he, and those that supported his decision to go independent, would have become politically ostracized and thrown out of the party, as stipulated by it's constitution, if he had not won.

So I have always asked: what kind of intelligence work went into the decision to insist that the man was not the right candidate to win the seat on the ticket of NPP?

I am therefore of the belief that when an individual is not known in a constituency but qualifies to contest, per the party's laid-down requirements, he/she must be allowed to contest and the decision regarding his/her fate left in the bosom of the constituents.

Now, as current national party executives, you are going to superintend the coming intra-party elections from polling stations to national, of which some of you are also contestants. It is therefore incumbent on you to ensure the process is fair, credible and transparent.

You must always be guided by the saying that OPPOSITION PARTIES DO NOT WIN POWER BY UNITY AND STRENGTH BUT IT IS RATHER RULING PARTIES THAT LOSE POWER BY PROTRACTED INTERNAL CONTESTATIONS.

I have always suggested that the party's national secretariat be furnished with effective lines of communication to enable the grassroots stay in constant touch.

As National Executives, you are not supposed to be available to only inner circle of friends and aquitances. That is abominably inimical to the concept of grassroots mobilisiation, and deblitatingly deadly to the party's electoral fortunes.

Even in advanced democracies where their welfare system is impeccable and citizens do not need anything from their party officials, there are still effective lines of communication for ordinary party people to stay in touch.

So in our case where people have needs, it is important to always be accessible, not necessarily to dish out cash, but show empathy and concern.

Where there are opportunities, it must be spread beyond the boundaries of your favourites.

OUR AGENDA OF MAKING GHANA A BETTER PLACE GOES BEYOND 7TH DECEMBER, 2024; and that is why our time and energies must be expended on acts that generate PEACE, UNITY, EMPATHY, CARE, LOVE AND TRANQUILITY, rather than selfishness, cronyism and arrogance.

INDEED, THE ALTERNATIVE IS AN EYE-SORE BUT LET US NOT MAKE WHAT WE HAVE UNATTACTIVE.

Let’s avoid violence, anything that will tarnish image of NP...
46 minutes ago