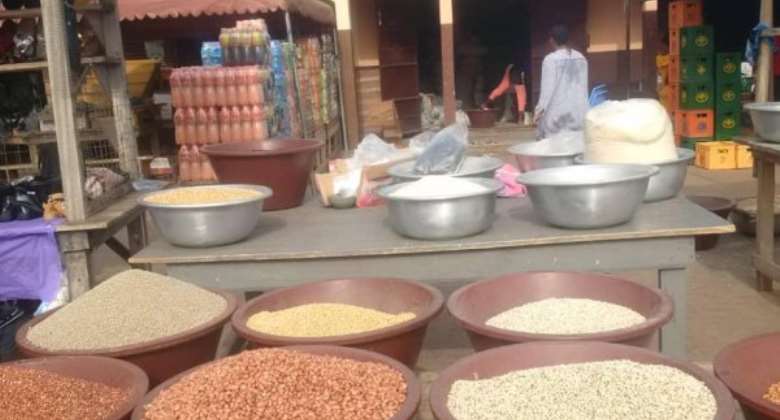 Traders of essential commodities at the popular Akatsi Central market, one of the largest markets in the Volta region, have continued to lament as prices of food stuffs continue to soar.

A tour by the Ghana News Agency (GNA) to the market showed a cross section of traders complaining due to the exorbitant cost of commodities.

Madam Agnes Aklasu, a trader who deals in maize business in large quantities, said, the sharp increase in the cost of maize had affected her business capital as sales were low, stating that she would hardly make profit after trading.

“A bowl of maize has now increased to Gh¢10.00 and above whilst it was around Gh¢6.00 same month last year with more profits than now. With this, we still have to make our own profit. This is the reason we are calling on the government to come to our aid by subsidising commodities grown in our communities. We are tired of low sales,” she said.

She also attributed the situation to the high cost involved in transporting their goods to the consumer end.

“High cost of transportation is having adverse effects on our businesses. A bowl of 'Keta School boys', now sells at Gh¢50.00 as against Gh¢30.00 last year. We are only praying that our labour should not be in vain at the close of trading activities,” a trader said.

Mrs Anyidoho Mawusi, who sells charcoal, lamented that she always made trips to villages to buy some charcoal, but unfortunately, the business had gone moribund.

She added that by the time she calculated her expenses and subtracted the same from the cost of the items, buyers often felt cheated.

On her part, a full bag of charcoal now stands at Gh¢150.00 as compared to Gh¢90.00 last year which is making it difficult for easy patronage.

Mama Biana, one of the market leaders in an engagement with the GNA, said their outfit was recording low patronage during the start of the December festive season but was optimistic the trend would reverse if government considers further reduction on the new taxes released in the 2022 budget statement.

She said prices of pepper, rice, beans, key soap, among others, have all gone up and the hike in price cut across every item.

On the part of some international traders from neighbouring countries such as Togo, they revealed, the closure of the land borders was hugely affecting their movements to do business since they paid more before manoeuvring to cross the border, hence leading to an increase in prices of their goods.

The GNA also observed that transportation activities in bringing goods to the market had reduced.

Some shop owners such as boutiques and others along the business streets of Akatsi, also complained about low patronage with few days to Christmas.

However, Peter Atitsogbui, a boutique owner, explained, the season would bring customers at the appropriate time saying, “there is no need to rush and draw conclusions.”

In his analysis of the situation, Mr Bismark Kuyole, the Budget Analyst of the Akatsi South Municipal Assembly, disclosed to the GNA, the actual performance quarter-by-quarter in 2020 presents a mixed picture while targets were exceeded in the first and fourth quarters, with the second and third quarters performing below expectation.

"The second quarter, which was at the height of the Covid-19 pandemic restrictions, performed particularly poorly," he said.

He said it was a demonstrable evidence of the impact the pandemic had on revenue mobilisation efforts.

Meanwhile, the year 2021 has witnessed slow fiscal recovery after the effects of the Covid-19 pandemic in 2020.

Mr Kuyole stated, revenue performance as at September, 2021, compared to same period in 2020 declined by 5.3 percent.

"This is in spite of renewed efforts to boost resource mobilisation through the formation of a Revenue Working Group, formation of Market Committee, among other initiatives to quicken the recovery process.”